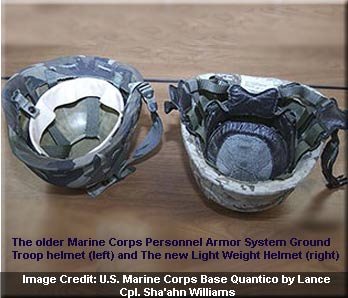 We’ve always been told to be careful about not hurting our head as it concerns our brain. A new research pertaining to the brain, conducted at the University of Rochester now claims that by using numerical hydro-dynamic computer simulations, it was discovered that nonlethal blasts can supposedly provoke enough skull flexure to produce potentially damaging loads in the brain, even without direct head impact.

This may supposedly lead to better understanding of head injuries as well as enhanced military helmet design. Lawrence Livermore scientists Willy Moss and Michael King, along with University of Rochester colleague Eric Blackman conducted this research.

Mechanical loads in the brain, often without skull fracture apparently leads to traumatic brain injury (TBI). It seems to cause complex, long-lasting symptoms. Motor vehicle and sports accidents may cause TBI in civilians as it leads to a direct head impact. Modern body armor protects soldiers from explosive attacks. So due to lower mortality rates, it seems to have exposed the higher occurrence of TBI amongst them.

Extensive research has been conducted to find out about traumatic brain injury from automobile accidents as the head is directly impacted. But TBI which may result from blast waves appears to have not been well understood as here the head is not impacted.

To establish that a blast wave may cause a skull flexure on the head, the team used three-dimensional hydrodynamic simulations to prove their point. Apparently the blast wave generates mechanical loads in the brain tissue that can be compared to those when the head is injured, even at non-lethal blast pressures as low as 1 bar over atmospheric pressure. The researchers demonstrated that blast waves may affect the brain very differently from direct impacts.

King, LLNL co-principal investigator commented “The blast wave sweeps over the skull like a rolling pin going over dough.”

According to Moss, even though the simulations claim that the skull is distorted only about 50 microns which is the width of a human hair, this is large enough to generate potentially damaging loads in the brain.

The armor systems that have been designed to protect soldiers from impacts and projectiles may not be of use for the protection from blast wave. This is because direct impact and blast waves affect the brain in primarily different ways.

The team analyzed as to how helmets and their suspension influence the blast-induced mechanical loads on the brain. They looked at two common systems. One is a nylon web system previously used in the Personnel Armor Systems Ground Troops infantry helmet and the other is viscoelastic foam pads supposedly like those in advanced combat helmets. Both helmets were claimed to be modeled as hemi-ellipsoidal Kevlar shells.

In the second case, it can lead to dangerous loads in the brain as the ‘under wash’ effect is supposedly thwarted by the presence of the foam pads. But in under blast loading, the pads may tend to become stiffer so that the blast wave-induced motion of deformation of the helmet is transferred to the skull.

Moss mentioned “The possibility that blasts may contribute to traumatic brain injury has implications for injury diagnosis and improved armor design.”

Blackman added that by comparing the effect of blasts on the head with the effect of head impacts we’d be able to make some sense of the distinct mechanisms of injury, the damage a solider might incur, and how a helmet might be designed to minimize both.

This research appears online in the Physical Review Letters.