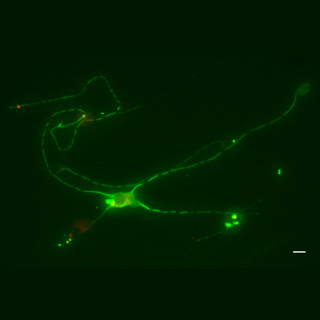 In a small room at Washington University in St. Louis, Alexis Webb bends over a microscope in a black box draped with black cloth. Through the microscope, a single nerve cell on a glass cover slip glowing dimly could be seen. The glow could mean that the secluded nerve cell is busy keeping time.

Alexis Webb, a graduate fellow in the Neuroscience Ph.D. Program, working with Erik Herzog, Ph.D., associate professor of biology in Arts & Sciences; Nikhil Angelo, an undergraduate biology major; and James Huettner, Ph.D., associate professor of cell biology and physiology in the School of Medicine, have established that single cells which may be secluded from the biological clock may keep daily time all by themselves. However, by themselves, they are unpredictable. The neurons may get out of synch and impulsively stop or begin fluctuating again.

The biological clock, a one-square millimeter area of the brain known as the suprachiasmic nucleus, or SCN, immediately on top of the roof of the mouth and atop the crossing of the optic nerves may roughly include 20,000 neurons. These cells, surprisingly may contain the machinery to produce every day, or circadian, rhythms in gene expression and electrical activity. But the single cells are said to be careless and may correspond with one another to set up a logical 24-hour rhythm, as per Herzog.

The WUSTL researchers mention that these features may make the SCN an elastic clock that may reorganize to stay in synch in an ever-changing surrounding. The primary sloppiness may be in all probability what lets us regulate to local time when we cross time zones and differ our sleep cycles with the season.

Herzog commented, “We’ve known for more than 15 years that unicellular organisms like cyanobacteria can keep 24-hour time, and isolated cells from the marine snail eye can as well. But nobody was sure whether individual cells in vertebrates are circadian pacemakers.”

The SCN may include various types of neurons that apparently make different neurochemicals and relations within the SCN and to other parts of the brain.

Webb apparently absorbed portions of mouse SCN with enzymes to cut off individual neurons and then plated the cells sparingly on a dish.

Webb remarked, “The neurons will actually attach to the glass and grow. And as long as you give them all of the nutrients they need, they’ll live for months.”

The cells had apparently been hereditarily engineered to shine whenever they expressed the time-keeping gene Period 2. The cells came from transgenic mice where the Period 2 gene had apparently been connected to one found in firefly tails. The rhythmically waxing and waning glow was apparently identified by a camera intended to capture the light from distant stars and so sensitive that it may record the passage of even a solitary cosmic ray.

The footage apparently displayed that all cells appeared to keep a 24-hour rhythm and there may be no particular pacemaker cells, but they don’t appear to do it all the time. Neurons that may make diverse neurochemicals display circadian rhythms in gene expression, and nobody was more loyal than the others.

Webb commented, “Single cells sometimes will be very robust and rhythmic, but most of the time they quit or lose the rhythm. It appears that the network structure of the SCN is important for stabilizing these sloppy intrinsic rhythms.”

To explain that different kinds of SCN neurons may not have severely definite roles, Webb apparently uncovered SCN to the drug TTX, a pufferfish toxin that shuts down cell-to-cell interaction. She washed off the TTX, and then added it again, to see if during the second time, the cells were uncovered to the toxin, and that they may perform in the same manner.

Webb mentioned, “We found cells that changed their behavior. So the first time they were isolated, or uncoupled, with TTX, they continued to oscillate, but the second time they stopped oscillating. But we also saw the reverse: cells that were non-oscillatory becoming oscillatory.”

Ironically the carelessness of the clock is what may make it so accurate.

Herzog quoted, “The SCN is the master clock that synchronizes other biological clocks, like your liver or your lung. Those peripheral clocks can keep 24-hour time, but not for very long. Because the SCN is built differently, it can self-sustain — it can keep on ticking like a good Timex.”

The researchers could now focus on the associations that may assist in synchronizing and stabilizing these biological oscillators.

This research was published in online Early Edition of the Proceedings of the National Academy of Sciences.