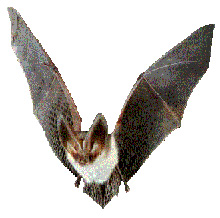 Australian scientists have played a key role in the discovery of a new virus carried by bats that can cause serious flu-like symptoms in humans.

Dr Linfa Wang, a molecular virologist with the CSIRO in Geelong, Victoria, said the new virus was named Melaka, after the area of Malaysia where it was isolated in early 2006.

“So far, we don’t have evidence that it is fatal, but it causes severe respiratory distress,” Dr Wang told AAP.

“It like a severe dose of flu or SARS-like symptoms,” he said.

Over 8,000 cases of SARS, or Severe Acute Respiratory Syndrome, were reported in a number of countries after an epidemic between November 2002 and July 2003.

Dr Wang said the Melaka virus was closely related to the Nelson Bay reovirus, which was isolated from a fruit bat in NSW in 1968.

Reoviruses, or Respiratory Enteric Orphan viruses, were first isolated in humans in the early 1950s and named because they were not associated with any known disease.

The Melaka virus causes fever, headache, muscle aches and pains, as well as vomiting and diarrhoea in children.

So far, only one family in Malaysia had fallen victim to the virus and all had recovered, Dr Wang said.

“That family had a visit from a bat,” Dr Wang said.

“In Malaysia, they have open doors and open windows, and one night they were watching TV and a bat flew in and frenetically tried to get out for two to three minutes. It eventually went out and then seven days later, the father of the family got sick. Another seven days later, two of his five children came down with flu-like symptoms.”

But when they could not identify the samples sent to laboratories in Selangor, they called on Australian scientists at the CSIRO laboratories in Geelong to collaborate on the project.

Dr. Wang said Australia had a similar genus of fruit bats to those in Malaysia, although not the same species.

“What we want to know now is how widespread it is in bats and what the risk factors are in different populations,” he said.

“We should also try to avoid direct contact with bats, which are the only mammals that can fly, and therefore have a different environment and ecological niche.”