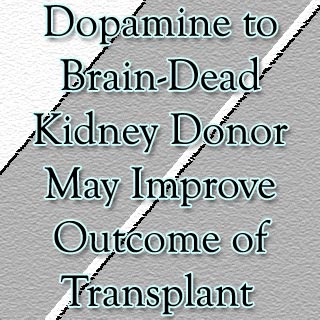 If dopamine is administered to a brain-dead, heart-beating kidney donor, then it supposedly decreases the want for dialysis of the kidney receiver in the first week post transplantation. This is claimed by the result of a new study.

Majority of kidneys transplanted worldwide are supposedly retrieved from deceased heart-beating donors. As a consequence of brain death, the kidney graft is exposed to numerous injurious events prior to transplantation that predispose it to functional impairment after transplantation. This is as per background information supplied by the authors. The outcome of the transplantation may be affected by limiting organ injury through medical donor management. The existing suggestions may be based on inadequate verification from observational studies only.

Peter Schnuelle, M.D., Ph.D., of the University Medical Centre Mannheim, Germany, and colleagues assessed the success of donor pre-treatment with dopamine. They evaluated it by supposedly gauging the postoperative occurrence of dialysis in kidney transplant recipients who may have received a kidney graft from a brain-dead donor. Around 264 deceased heart beating donors and about 487 subsequent kidney transplants were included in the analysis. They were apparently conducted at roughly 60 European centers between March 2004 and August 2007. In December 2008, there was a final follow-up of the analysis.

The experts discovered that donor dopamine treatment apparently led to a notably decreased use of dialysis post transplantation. Lesser beneficiaries in the treatment group i.e 24.7 percent supposedly required multiple dialysis prior to renal function recovered as opposed to the recipients in the non-dopamine group about 35.4 percent.

The experts commented, “Accordingly, when both kidneys of each donor were transplanted, pretreatment of 10 donors prevented the need for multiple dialyses in 2 renal transplant recipients.”

The data also pointed out that multiple dialysis apparently raised the odds of graft failure in the long-term, while a single dialysis post-transplant supposedly did not.

The authors remarked, “Dopamine resulted in significant but clinically meaningless increases in the donor’s systolic blood pressure and urine production before surgical recovery of the kidneys but had no influence on outcome.”

The authors concluded by mentioning that this study shows that pretreatment of the deceased heart-beating donor with low-dose dopamine reduces the need for dialysis in the recipient after kidney transplantation.

This study was published in the September issue of JAMA.