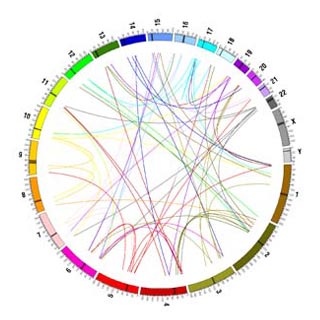 An international team of study experts apparently explained the map of alterations to the structure of human genomes and a resource they have claimed to develop for experts worldwide to look at the purpose of these changes in human disease. They also recognized about 75 ‘jumping gene’ areas of genome that could be discovered in more than one place in a few people.

Nevertheless, the team warns that they have apparently not found huge amount of contenders that might change vulnerability to complex diseases like diabetes or heart disease among the general structural variants. They proposed strategies for finding this ‘dark matter’ of genetic distinction.

Human genomes apparently vary because of single-letter variations in the genetic code and also as entire sections of the code might be removed or multiplied in diverse human genomes. These bigger, structural differences are known as copy number variants (CNVs). The latest study to chart and describe CNVs is of a scale and a power unrivaled to date, thereby including hundreds of human genomes, billions of data points and many thousands of CNVs.

Dr Matt Hurles from the Wellcome Trust Sanger Institute and a leader on the project, commented, “This study is more than ten times as powerful as our first map, published three years ago and much more detailed than any other. Importantly, we have also assigned the CNVs to a specific genetic background so that they can be readily examined in disease studies carried out by others, such as the Wellcome Trust Case Control Consortium.”

Dr. Matt added, “Nevertheless, we have not found large numbers of common CNVs that we can tie strongly to disease. There remains much to be discovered and much to understand and our freely available genotyped collection will drive that discovery.”

The outcome demonstrates that any two genomes apparently fluctuate by more than 1000 CNVs, or around 0.8% of a person’s genome sequence. Most of these CNVs are said to be removals, with a substitute being replications. In this study of apparently healthy people, it was seen that about 75 regions have jumped around in the genomes of these samples. Apparently more than 250 genes could lose one of the two copies in the genome without apparent results and an additional 56 genes could combine together potentially to form new composite genes.

It was seen that at least 1 in 17 children may have a new CNV. In several cases, CNV may have no apparent clinical consequences. Nevertheless, for a few, the effects are said to be harsh. In those cases the data is kept in the DECIPHER database, which is claimed to be a warehouse of clinical information about CNVs intended to assist the identification of uncommon disorders in young children. CNV’s are also said to be very old legacies of how our ancestors adjusted to their surroundings.

The team examined about 42 million places on the genomes of around 40 people, half of European ancestry and half of West-African ancestry. The scale of the technique meant they could apparently identify CNVs as tiny as 450 bases happening in 1 in 20 individuals. Nevertheless, the team admitted that their map of common variants may not report for much of the ‘dark matter’ of the genome.

Dr Steve Scherer of the Hospital for Sick Children, Toronto, commented, “Success in the hunt for the missing genetic causes of common disease has become possible in the last few years and we expect to find more as higher resolution searches become possible.”

Dr Charles Lee, one of the project leaders from Brigham and Women’s Hospital and Harvard Medical School in Boston, USA, mentioned, “We were determined to develop not only the map, but also to provide the resources that help other researchers and clinical cytogeneticists most rapidly use our CNV results. Already, the data that we have generated is benefiting other large-scale studies such as the 1000 Genomes Projects as well as making an enormous difference in the accurate interpretation of clinical genetic diagnoses.”

The team has apparently maximized the importance of their study by not only mapping the CNVs, but by also genotyping them, transferring them to a definite genetic background that could make them voluntarily helpful in extensive genetic studies like the Wellcome Trust Case Control Consortium.

This study was published by Nature.