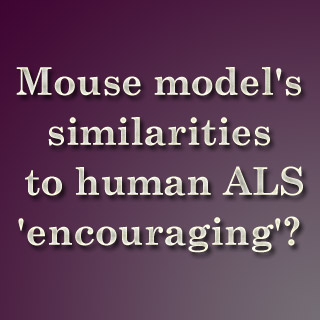 A latest mouse model of amyotrophic lateral sclerosis (ALS) strongly resembles the paralyzing disorder in humans. Atleast this is what researchers from Washington University School of Medicine in St. Louis claim.

The mouse model seems to have a point mutation or single letter of erroneous DNA code inside the gene for a protein called TDP-43. Researchers at the University of Pennsylvania were believed to have linked TDP-43 to hereditary forms of ALS in the year 2006.

Washington University scientists Nigel Cairns, Ph.D., and Alison Goate, Ph.D., were observed to have sequenced a point mutation in the TDP-43 gene of a St. Louis family with an inherited form of ALS. Moreover, Baloh’s lab created a mouse line with the family’s mutation.

“As far as we know, this is the first mouse model that recapitulates ‘typical’ ALS to be produced in more than a decade. That could make it very helpful for our efforts to better understand and identify treatments for this terrible disorder,” says senior author Robert Baloh, M.D., Ph.D., assistant professor of neurology.

Baloh further stated that, “Ten percent of all ALS cases are inherited, but only a small portion of the known inherited forms of the disorder are clinically indistinguishable from sporadic ALS. TDP-43 is only the second gene to be linked to an inherited form of ALS that appears clinically identical to sporadic ALS, and it’s very promising that this similarity allows the symptoms of sporadic ALS to be accurately modeled in mice.”

They found that although mice normally live more than two years, mice with the TDP-43 mutation seem to have lived only five months. Similar to humans, the mice were noted to have developed problems with walking, lose muscle mass ultimately leading to paralysis.

The findings further revealed that a bunch of unidentified proteins could possibly have developed within the motor neurons of the mice. Supposedly, this is an added symptom which echoes human ALS pathology.

Scientists identified that the TDP-43 protein seems to be both, a transcription and a splicing factor, which means that it binds to both RNA and DNA in order to regulate the formation of particular proteins. However, they appear to be unaware about adequate details regarding its normal function in order to determine how TDP-43 mutations cause ALS.

“The mutation could be making the TDP-43 protein toxic to nerve cells, or it could be blocking a normal function of the protein that is essential for those cells. The mice will help us test both of these possibilities,” adds Baloh.

Scientists already have another mouse model of ALS with a mutation in SOD1. However, according to Baloh, it hasn’t for all time been the best tool for predicting if treatments may possibly work in humans. SOD1 is known to be the foremost gene to be linked to an inherited form of ALS with usual symptoms.

“If we use the two models together to test potential treatments, though, that might provide us with a much finer screen. This could help relieve some frustration in the field, because there are a number of new drugs ready to be tested in humans, and we urgently need ways to determine which should be tried first,” continues Baloh.

It was observed that the TDP-43 mutant mice also have brain damage similar to patients with frontotemporal dementia. Frontotemporal dementia is known to be a disorder sometimes associated with ALS. Baloh and his colleagues may make use of the mice in order to discover the probable connection.

Evidently, Baloh’s work with the mice was made possible in part by the Hope Center for Neurological Disorders, collaboration between the School of Medicine and Hope Happens.

The findings of the research will be published in the online journal of Proceedings of the National Academy of Sciences.