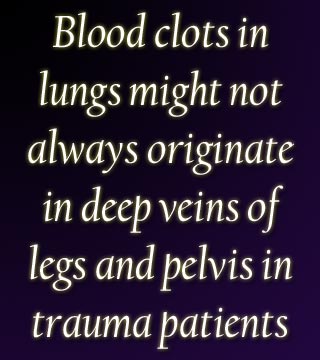 For the purpose of the study, the authors were believed to have analyzed nearly 247 trauma patients who underwent imaging scans of the lungs and the veins in the pelvis and legs between the year 2004 and 2006. In addition, they collected demographic information, along with data on injury type and severity, imaging findings, hospital length of stay and death rates.

“For decades, it has been taught that pulmonary embolism is a sequel of deep venous thrombosis. Forming in the lower extremity or pelvic veins, clots break off and travel to the pulmonary circulation. Therefore, deep venous thrombosis and pulmonary embolism should coexist in most patients, because part of the clot embolizes (lodges) in the lung, and part remains attached to the vein,” explains George C. Velmahos, M.D., Ph.D., at Massachusetts General Hospital and Harvard Medical School, Boston.

The study experts found that among the 247 patients, about 46 patients i.e. 19 percent seemed to have been identified with pulmonary embolism and approximately 18 patients i.e. 7 percent had deep venous thrombosis. Furthermore, they found that seven patients may possibly have suffered from pulmonary embolism and also about 15 percent had deep venous thrombosis.

Additionally, there appears to be no difference between patients with pulmonary embolism who did and did not have deep venous thrombosis in any of the demographic or clinical variables evaluated.

George further said that, “We propose that many pulmonary embolisms form primarily in the lungs and that the risk-benefit ratio of vena cava filters (devices designed to trap clots and stop them from traveling to the lungs) should be reconsidered.

“As computed tomographic venography (vein imaging) becomes more popular and accurate, this issue will be further explored, and it may be revealed that (not surprisingly) we have been preaching and practicing the wrong dogma for years,” he continues.

Among the probable explanations for the lack of association seems to be that the clots formed in the legs and pelvis totally dislocate when they travel to the lungs. Hence, no evidence of deep venous thrombosis could perhaps remain in patients with pulmonary embolism.

However, studies on corpses have shown that usually only part of the clot appears to break off and lodges in another place. George claimed that based on this data, there appears to be very little evidence that pulmonary embolism originates from deep venous thrombosis of peripheral veins.

The findings of the study have been published in the Archives of Surgery.