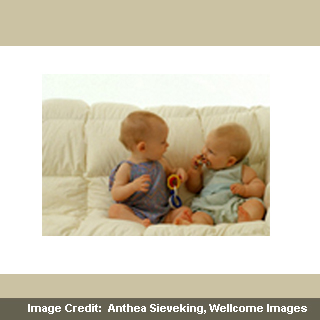 This unique news may deliver interesting perceptions on babies’ manner of paying attention. A study claims that babies as little as 5 months old may track the gaze of an adult towards an object and connect in joint attention. The study seems to propose that the human brain may grow this significant social skill astonishingly early during infancy.

Joint attention supposedly occurs when two individuals apparently share attention on the same thing. It is said to be an imperative human social skill required for several kinds of human behavior like teaching, teamwork, and language learning. Impairments in this skill are believed to be one of the most primitive indications of autism.

Dr Tobias Grossmann and Professor Mark Johnson from Birkbeck, University of London, apparently utilized a method called ‘near infrared spectroscopy’ (NIRS) to inspect which regions of an infant’s brain appear to be activated when paying joint attention to an item.

NIRS is said to be an optical brain imaging system which includes gauging the blood flow linked to brain activation. It is apparently compatible to examine freely-behaving toddlers. By using this non-invasive method, near-infrared light seems to journey from sources on a sensor pad situated on the head, through the skin, skull and basic brain tissue, and is then apparently identified by sensitive detectors on the same sensor pad.

A computer animated picture of an adult’s face was displayed in the experiment performed in Birkbeck’s Babylab. The adult could make eye contact with the baby, raise her eyebrows and smile, provide a fleeting look towards an item at her side, back to the baby and then at last turn her head to view the thing.

The scientists discovered that only when the babies were employed in joint attention with the adult, they supposedly applied a particular area of their brain called the left prefrontal cortex. This is a region on the front of the brain caught up in complicated cognitive and social behaviors.

Dr. Grossmann, a Sir Henry Wellcome Postdoctoral Fellow, commented, “Infants engaged in joint attention use a similar region of their brain as adults do. Our study suggests that the infants are tuned to sharing attention with other humans much earlier than previously thought. This may be a vital basis for the infant’s social development and learning.”

Dr. Grossman further added that in the future this approach could be used to assess individual differences in infants’ responses to joint attention and might, in combination with other measures, serve as a marker that can help with an early identification of infants at risk for autism.

The findings were published in the Royal Society’s Journal ‘Biological Letters’.