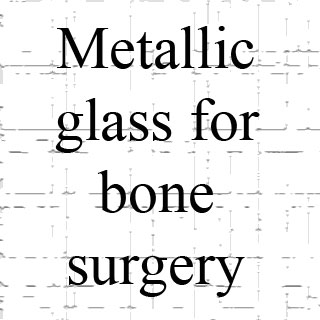 In the near future it may be possible to repair broken bones by using metallic glass. Apparently materials researchers at ETH Zurich have developed an alloy that could be seen as the biodegradable bone implants of the new generation.

When bones break, surgeons apparently require screws and metal plates to repair the broken bones and put them in place. Usually, they are made up of stainless steel or titanium. Once the bones have apparently healed, the metal parts have to be detached from the body by means of extra surgery.

In order to decrease the load on patients, materials researchers have apparently taken up the assignment of producing implants from bio-absorbable metals. These implants ought to steady the bones only for only as long as they may be required to heal. The metal apparently melts in the body over time, so removal surgery may be pointless.

Implants made of magnesium-based alloys are proving to be predominantly capable. Magnesium is apparently automatically steady and could disintegrate totally by discharging ions which may be tolerated by the body. Nonetheless, all magnesium alloys are said to have one chief disadvantage i.e. when they dissolve, they apparently generate hydrogen (H2), which may be injurious to the body. Around the magnesium implants, gas bubbles apparently increase which may hamper bone growth and the healing process which could cause infection.

Materials researchers operating with Jorg Loffler, Professor of Metal Physics and Technology at ETH Zurich have apparently now wiped out these side-effects. They seemed to have succeeded in generating an innovative magnesium-zinc-calcium alloy in the shape of a metallic glass which is said to be biocompatible and apparently displays considerably more positive degradation behavior.

Metallic glasses are believed to be formed by quick cooling of the molten material. The pace of the cooling process may thwart the atoms from implementing the crystal structure in conventional metals. As a result, metallic glasses are claimed to have a vague structure like that of window glass. Thanks to this procedure, the researchers could put in much more zinc to the molten magnesium than which may be possible with usual alloys.

The glassy alloy developed by the ETH researchers Bruno Zberg, Peter Uggowitzer and Jorg Loffler apparently comprises of about 35% zinc and around 5% calcium atoms, and the rest is apparently made up of magnesium. A crystalline magnesium-zinc alloy may include a limit of roughly 2.4% zinc atoms. The magnesium-zinc-calcium glass may be generated in a thickness of up to 5 millimeters.

The main benefit of a high percentage of zinc is that it may alter the decomposition behavior of the magnesium essentially. In fact, clinical tests with small platelets of the new magnesium-zinc-calcium alloy apparently did not display any hydrogen evolution. Therefore this new alloy, in the shape of a metallic glass, apparently has significant prospective as a non-harmful bone implant material.

This research has been published in the online version of Nature Materials.