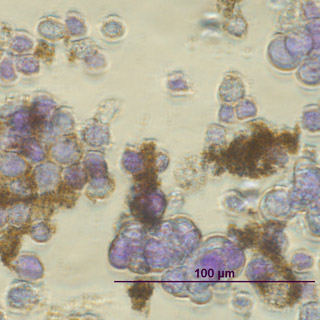 Scientists seem to be attempting really hard at developing new means in fighting the deadly as well as debilitating disease, cancer. Researchers from Georgia Tech and the Ovarian Cancer Institute have additionally developed a likely new treatment against cancer that applies nanoparticles to bind to cancer cells, thereby eliminating them from the body.

The notion supposedly came to the team from the work of Ken Scarberry, then a Ph.D. student at Tech. Apparently, he initially envisaged the thought as a way of hauling out viruses and virally infected cells. At his advisor’s proposal, Scarberry supposedly started examining as to how the system may function with cancer cells.

John McDonald, professor at the School of Biology at the Georgia Institute of Technology and chief research scientist at the Ovarian Cancer Institute, commented, “We are primarily interested in developing an effective method to reduce the spread of ovarian cancer cells to other organs.”

In an earlier research, Ken Scarberry and John McDonald illustrated that by labeling the cancer cells of the mice a fluorescent green tag and marking the magnetic nanoparticles red, they could apply a magnet and shift the green cancer cells to the abdominal area.

Now McDonald and Scarberry, presently a post-doc in McDonald’s lab, has demonstrated that the magnetic method may function with human cancer cells.

Scarberry mentioned, “Often, the lethality of cancers is not attributed to the original tumor but to the establishment of distant tumors by cancer cells that exfoliate from the primary tumor. Circulating tumor cells can implant at distant sites and give rise to secondary tumors. Our technique is designed to filter the peritoneal fluid or blood and remove these free floating cancer cells, which should increase longevity by preventing the continued metastatic spread of the cancer.”

In examinations, they appeared to have illustrated that their method apparently worked as well at arresting cancer cells from human patient samples as it did formerly in mice. The subsequent stage is to check how well the system may augment survivorship among live animal models. If that goes effectively, they could then examine it with humans.

The study was published in the journal Nanomedicine.