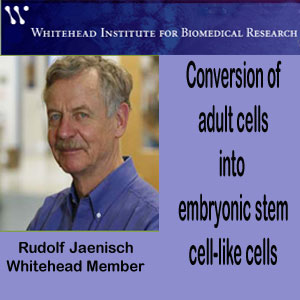 The Whitehead Institute researchers have, apparently, made the production of the so-called induced pluripotent stem (iPS) cells, easier. It’s said that, in the reprogramming process, they have reduced the number of used viruses from four to one.

Previously, reprogramming depended on four separate viruses, to transfer the genes to the DNA of the cells. One virus was for each reprogramming gene; Oct4, Sox2, c-Myc and Klf4. On activation, these genes are believed, to convert the cells to an embryonic-like state from their adult, differentiated status.

Evidently, in reprogramming, the viruses used can possibly be linked to cancer, due to its function of placing the DNA anywhere in the cell’s genome. Thus, this could lead to an activation of the cancer-causing genes or oncogenes. Therefore this method is believed to be risky for its potential use in humans. In order to be able to effectively use the iPS cells for treatment in human diseases, researchers may have to look for other ways of reprogramming with such viruses. This technique may prove to be beneficial in eliminating the risks involved with the use of harmful viruses.

Rudolf Jaenisch, Whitehead Member, and professor of biology, Massachusetts Institute of Technology, says, “This is an extremely useful tool for studying the mechanisms of reprogramming. Using this one virus creates a single integration in the cells’ DNA, which makes things much easier to handle.”

An MIT graduate student working in Jaenisch’s lab, Bryce Carey, led the team by joining in tandem the four reprogramming genes through the use of bits of DNA that code for polymers, called 2A peptides. They produced a so-called polycistronic virus, which could, apparently, express all the four reprogramming genes after being inserted in the genomes of mature mouse and human cells. It’s stated that, apparently, when the protein creating machinery of the cell decodes the DNA of the tandem genes, the process of making a protein begins. But, it’s said that, when the cells’ protein-creating-machinery tries to decode the 2A peptide DNA, it stops briefly, apparently, to permit the release of the first gene’s protein. This technique continues, till the proteins have been made for all the four genes.

Carey, with the use of tandem genes, developed iPS cells, which instead of various combinations of the virus, apparently, consisted of a single copy of the polycistronic vector. This, supposedly, signifies that this approach, if fused together with other technologies, could become even more harmless.

Carey’s single virus method in reprogramming, is said to be, apparently, lesser efficient than the previous approaches used. The researchers are attempting to unveil appropriate answers to this criterion.

Jaenisch, in spite of the drawbacks of the single virus method, believes that this is, evidently, a step taken forward in this field.

Scientists hope that these embryonic stem-cell-like cells may soon be used to treat illnesses like diabetes or Parkinson’s disease.