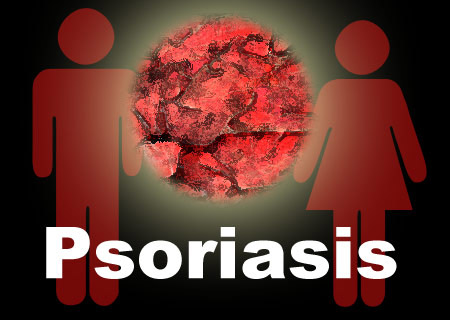 One of the most common papulosquamous diseases plaguing the developed and the developing world is psoriasis. Coined way back in 1864 by Dr. Ferdinand Ritter Von Hebra, dermatologist and researcher at University of Vienna, Psoriasis was identified due to the changes it produced in the skin as seen under the microscope. ‘Psora’ meaning ‘itch’ in Greek implies Psoriasis so Itchy which justifies the most important symptom of the disease-itching.

Psoriasis is a skin as well as joint disease having multi-factorial etiology. It affects almost 5.5 million people in USA and around 21.5 million citizens of India. Found in both the sexes and all ages from infants to elderly, this condition mostly occurs among the elderly populations. A high number of females are affected as compared to males.

The exact cause of psoriasis remains unknown to science as yet, but numerous causes have been thought to affect the exacerbations and remissions of the disease. The familial occurrence of disease implies a genetic predisposition. Trauma of any kind, be it mechanical, chemical or radiation may trigger off or exacerbate psoriatic lesions. This is called as Koebner phenomenon. Certain commonly used drugs of modern medicine apparently worsen or induce psoriasis like- Chloroquine, lithium, beta-blockers, NSAIDs. Withdrawal of systemic steroids in a known case of psoriasis seems to precipitate a generalized pustular or erythrodermic varieties of psoriasis. The summer season seems to alleviate and winter aggravates the lesions of psoriasis. Presence of other auto-immune disease like Rheumatoid arthritis, hypothyroidism, SLE has higher associations with psoriasis. Stress of any origin has also been predicted to worsen or initiate psoriasis.

The basic pathology of psoriasis is the increased turnover of the epidermal cells and a deficiency of the keratinocyte maturation phase resulting in a visible desquamation of skin (scaling). Vascular changes lead to underlying redness (erythema). T lymphocyte mediated auto-immune reaction seems to stimulate epidermal proliferation and attract neutrophils for epidermis.

Symptoms are plenty. Erythematous papules covered with scales are the basic lesions of psoriasis. Variations in the location of lesion, thickness and color of scales, underlying redness and presence of pustules necessitate differentiation of various varieties of psoriasis. The papules may enlarge and join to form Plaques topped with thick silvery white scales. Removal of scales by scratching causes pin-point bleeding from underlying capillaries. This is commonly termed as an Auspitz’ sign. While ring-shaped lesions are called Annular/Figurate psoriasis and linear lesions as Linear Psoriasis, lesions beginning as follicular papules are referred to as Follicular psoriasis. Rash-like, red and itchy lesions start appearing gradually and keep on increasing. They are present typically on extensor surfaces like elbows, knees, extensor surfaces of hands feet and scalp as well as the sacral region. Palms, soles and nails are also commonly infected sites. The lesions remit with medication and start increasing the minute they are stopped.

Around 5 percent of patients have associated joint pains or swelling esp. the distal finger joints. It may also affect a few large joints. Variations in location-when lesions are present in flexures and folds rather than extensor surfaces are called Flexural psoriasis. When it affects the entire body with intense redness and scaling it is known as Erythrodermic psoriasis. When lesions occurr in areas of excess sebum production like lower chest, scalp, forehead, shoulders etc the scales appear more yellow than silver and is termed as Seborrheic psoriasis. Guttate psoriasis is a variation in which drop-like papules topped with white scale appear all over particularly the torso. These lesions probably resolve within 2 months.

Commonly, psoriasis is diagnosed on the typical symptoms and presentation. Tests are not needed commonly and rarely a dermatologist may ask for a skin biopsy to confirm it.

Complications of Generalized pustular psoriasis can be life threatening as the patient become febrile and toxic as waves of pustules appear all over the body. Low calcium and protein may be an outcome of the same. Similarly, erythrodermic psoriasis is an emergency which must be immediately hospitalized and treated with steroids.

Prognosis is variable as different patients respond differently to various treatments. Most have cycles of remission and exacerbation. Sometimes patients respond to a particular therapy with resistance thereafter while others are resistant right from the beginning with symptoms appearing the entire life.

In general, present medicine considers it to be incurable. Only the symptoms can be bought and kept under control with treatment. Discontinuation of treatment by modern medicine causes recurrence of the rash in the same or exaggerated manner and is frequently followed by resistance.

The following measures are used for treatment:

Also, the side-effects as compared to steroids used in modern medicine are much lesser causing more patient compliance. They are even cheaper and almost equally effective. There are practically no contraindications for these systems too.