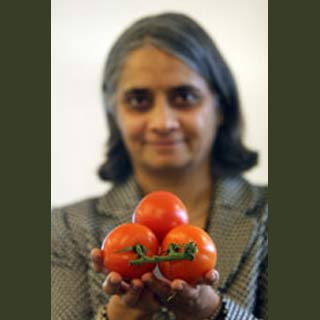 Ever wondered what gives tomatoes their tangy red color? Well, the ingredient called lycopene gives tomatoes their redness and is found in many other red fruits and vegetables too. Scientists at the University of Portsmouth have cited that cooked tomatoes could kill prostate cancer cells in the lab due to the presence of lycopene.

The team believed that the association between cancer cells and endothelial cells is apparently responsible for cancer metastasis. These cells then impede healthy blood supply in the body. Lycopene was found to deter this link between the aforesaid cells, which are crucial for cancer to spread in the body.

Dr Mridula Chopra, Director of the research, quoted, “I stress that our tests were done in test tubes in a laboratory and more testing needs to be carried out to confirm our findings, but the laboratory evidence we have found is clear – it is possible to intercept the simple mechanism some cancer cells use to grow at concentrations that can be achieved by eating sufficient cooked tomatoes.”

The findings could be essentially implicated in prostate cancer, as lycopene seemed to assemble in prostate tissues. Lycopene is mostly found in red fruits and vegetables, but its concentration is the highest in tomatoes. Its effect appeared to be more pronounced when it was exposed to slight processing by the addition of little cooking oil.

Considering that all types of cancer cells follow a similar procedure of hijacking healthy blood supply, this research holds significance. However, further analysis is required to gauge if lycopene could work against cancer in humans, though it has been affirmed in the lab.

The report is published in the British Journal of Nutrition.