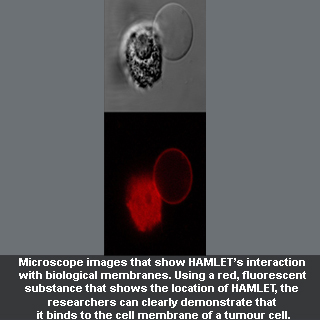 Scientists are said to be discovering new things every other day that may potentially help in treating cancer. Well, a new research from Lund University and University of Gothenburg claims that a substance seen in breast milk may destroy cancer cells.

Even though the unique substance, called HAMLET (Human Alpha-lactalbumin Made LEthal to Tumor cells), was seemingly found in breast milk many years ago, it is only now known that it could be feasible to examine it on humans. Patients suffering from bladder cancer who were treated with the substance apparently excreted dead cancer cells in their urine following every treatment. This has supposedly increased hopes that it could be crafted into medication for cancer care in the coming future.

Researchers at the University of Gothenburg are said to be concentrating on how HAMLET may be taken up into tumor cells. The scientists, Roger Karlsson, Maja Puchades and Ingela Lanekoff, are trying to achieve a comprehensive understanding of how the substance communicates with cell membranes

HAMLET was believed to have been discovered unintentionally when study authors were investigating the antibacterial properties of breast milk. Additional studies appeared to illustrate that HAMLET includes a protein and a fatty acid that are both seen naturally in breast milk. Until now, it has not been established that the HAMLET complex is impulsively developed in the milk. It is hypothesized, nevertheless, that HAMLET could grow in the acidic setting of the babies´stomachs.

The research was published in the journal PLoS One.