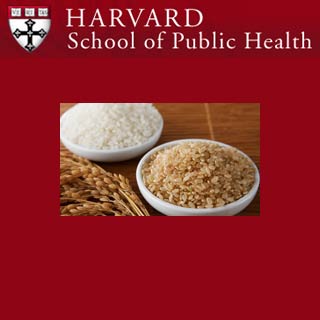 Experts from the Harvard School of Public Health (HSPH) identified that increased risk of type 2 diabetes was linked to five or more servings of white rice per week. On the contrary it was observed that consuming two or more servings of brown rice per week was linked to a low risk of the disease. They found that the risk of type 2 diabetes was reduced by 16 percent as 50 grams of white rice was replaced with an equal amount of brown rice. This same replacement with other whole grains like whole wheat and barley was observed to reduce the risk by 36 percent.

Experts claim the study to be the first one to evaluate the relation between white rice and brown rice with diabetes specifically among Americans. They observed that the consumption of rice has drastically increased over the years. Experts suggest that replacing white rice and other grains with whole grains and brown rice may reduce the risk of the disease. Brown rice is known to contain fiber content, minerals, vitamins, and phytochemicals and it does not increase blood sugar levels due to which it is considered to be a better option than white rice. Milling and polishing often wash away all the vitamins, minerals and most of the fiber which restrains diabetes.

Experts analyzed white and brown rice consumption in relation to type 2 diabetes risk. The study was conducted on 157,463 women and 39,765 men who participated in the Brigham and Women’s Hospital-based Nurses’ Health Study I and II and the Health Professionals Follow-up Study. They examined questionnaires based on diet, lifestyle and health which were completed by the participants every four years. During the 22 years of follow-up in NHS 1 participants scientists identified 5,500 cases of type 2 diabetes, 2,359 cases over 14 years in NHS II participants and 2,648 cases over 20 years in HPFS participants.

Experts observed that consumers of white rice were less likely to have European ancestry or to smoke but they were likely to have a family history of diabetes. Eating brown rice was linked to a more healthy diet and lifestyle. Inspite of adjusting various factors like age, body mass index, smoking status, alcohol intake, family history of diabetes, and other dietary habits it was identified that consuming white rice raised the risk of the disease. Ethnicity was linked to white rice consumption and diabetes risk. In order to understand these better, scientists conducted secondary analysis on white participants and similar results were observed without any variation.

The participants consumed low amounts of brown rice therefore it was difficult to judge if high intake of brown rice reduced the risk. It was observed that replacing white rice with other whole grains helped lower diabetes risk. Scientists feel that there will be more reliable findings depending on greater consumption of whole grains compared to brown rice.Hu said that from a public health point of view whole grains should be suggested as the primary source of carbohydrates for the U.S. population as compared to refined carbohydrates, such as white rice. He further shares that these findings may be significant for Asian and other populations where rice is a staple food.

The study appeared online on June 14, 2010, on the website of the journal Archives of Internal Medicine.