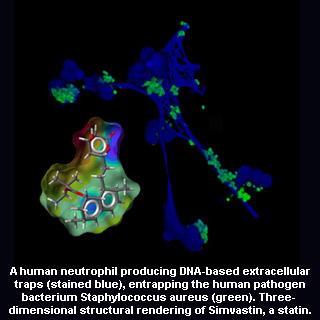 Statins, the widely prescribed medication for lowering cholesterol level were recently asserted to decline the risk of severe bacterial infections including pneumonia and sepsis. Researchers from the University of California, San Diego School of Medicine and Skaggs School of Pharmacy and Pharmaceutical Sciences claim that statins are beneficial as they activate the bacterial killing properties of white blood cells. It was discovered that phagocytes possibly become more effective after being exposed to statins.

Phagocytes are white blood cells killing and ingesting harmful bacteria, foreign particles as well as dead or dying cells. The statin-induced improvement in bacterial killing may fail to correspond with heightened uptake of bacteria by these specialized white blood cells. Scientists suggest that statins stimulate phagocytes to emit ‘extracellular traps,’ which are specialized webs of DNA-based filaments embedded with anti-microbial peptides and enzymes. These traps seem to ensnare and destroy bacteria before they spread in the body. The research focused on Staphyloccocus aureus, a common antibiotic-resistant human pathogen triggering everything from minor skin infections to life-threatening meningitis and sepsis.

Victor Nizet, MD, professor of pediatrics and pharmacy, lead investigator, shared, “We found these drugs fundamentally alter how white blood cells behave upon encountering bacteria. In our studies with staph bacteria, the net effect of statin treatment was to improve bacterial killing and extracellular trap formation. These same changes might not be so consequential for defense against less virulent bacteria that are easily susceptible to uptake and killing within phagocytes.”

Experiments conducted point out that mice treated with statins are more resistant to staph infections. Moreover, phagocytes isolated from these mice were highly effective at killing staph bacteria. Simple exposure of freshly isolated human white blood cells to statins in a test tube probably increased their ability to kill staph and other important disease causing bacteria. In every case the elevated killing supposedly linked with greater release of the DNA-based extracellular traps by the phagocytes. It was affirmed that statins are more beneficial than simply restricting cholesterol production.

The research was published in the November 18, 2010 issue of Cell Host and Microbe.