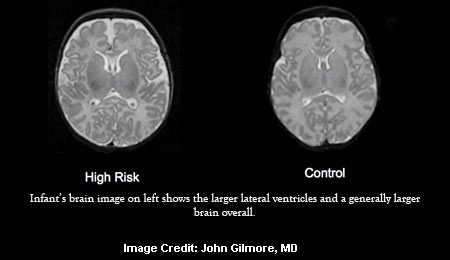 Schizophrenia is known to be a mental disorder described by abnormalities in the sensitivity or appearance of reality. Experts from the University of North Carolina at Chapel Hill and Columbia University claim to be the first to observe brain abnormalities among children who are at high risk of being affected by schizophrenia shortly after birth. Findings may help in early detection of the disease and provide better prevention and treatment.

Experts observed that brain abnormalities linked with schizophrenia risk were noticeable among babies only a few weeks old. They used ultrasound and MRI to evaluate brain progression in 26 babies who were born to mothers suffering from the disease. People who had first degree relatives with the disease seemingly had greater chances of getting affected.

Lead study author John H. Gilmore, MD, professor of psychiatry and director of the UNC Schizophrenia Research Center reveals, “It allows us to start thinking about how we can identify kids at risk for schizophrenia very early and whether there things that we can do very early on to lessen the risk”.

Scientists revealed that boys with greater risk had larger brains and larger lateral ventricles compared to those with no psychiatric illness. Larger brains in infants were also linked to autism. However they did not observe any difference in the brain size among girls. This revealed that schizophrenia was more frequent and rigorous in males.

Gilmore quoted, “This is just the very beginning. We’re following these children through childhood. The team will continue to measure the children’s brains and will also track their language skills, motor skills and memory development. They will also continue to recruit women to the study to increase the sample size”.
He further added, “This research provides the first indication that brain abnormalities associated with schizophrenia can be detected early in life. Improving early detection could allow doctors to develop new approaches to prevent high-risk children from developing the disease. The study will give us a better sense of when brain development becomes different. And that will help us target interventions.”

In conclusion experts suggest that it is not a compulsion that boys with larger brains will develop schizophrenia. Relatives of people affected with the disease have faint brain abnormalities but they show limited or no symptoms.

This study was published recently online by the American Journal of Psychiatry and will be published on paper in the September issue of the journal.

When Stressed, Men are more Likely than Women to Crave Alcohol:...