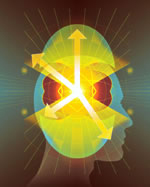 On Thursday, researchers from the University of California, Los Angeles said that Chemotherapy causes changes in the brain’s metabolism and blood flow, which could last as long as 10 years. This discovery can help to explain the confusion and mental fog experienced by many a cancer survivor.

The researchers found that women who had undergone chemotherapy five to ten years earlier had a lower metabolism in a key region of the frontal cortex. Women who were treated with chemotherapy also showed a spike in the blood flow to the frontal cortex and cerebellum while performing memory tests. According to the researchers, this indicates a rapid jump in activity level.

“The same area of the frontal lobe that showed lower resting metabolism displayed a substantial leap in activity when the patients were performing the memory exercise,” said Daniel Silverman, the UCLA associate professor who led the study. “In effect, these women’s brains were working harder than the control subjects’ to recall the same information,” he said in a statement.

Experts estimate at least 25 percent of chemotherapy patients are affected by symptoms of confusion, so-called chemo brain, and a recent study by the University of Minnesota reported an 82 percent rate, the statement said. “People with ‘chemo brain’ often can’t focus, remember things or multitask the way they did before chemotherapy,” Silverman said. “Our study demonstrates for the first time that patients suffering from these cognitive symptoms have specific alterations in brain metabolism.”

The study tested 21 women who had surgery to remove breast tumors, 16 of whom had received chemotherapy and five who had not. The researchers used positron emission tomography scans to compare the brain function of the women. They also compared the scans with the 13 women who had not had breast cancer or chemotherapy.

Positron emission tomography creates an image of sections of the body using a special camera that follows the progress of an injected radioactive tracer. Researchers used the scans to examine the women’s resting brain metabolism as well as the blood flow to their brains as they did a short-term memory exercise.

Silverman said the findings suggested PET scans could be used to monitor the effects of chemotherapy on brain metabolism.

Since the scans already are used to monitor patients for tumor response to therapy, the additional tests would be easy to add, he said.