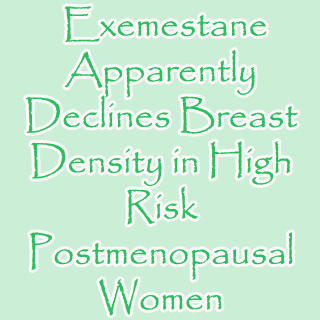 Exemestane is in a class of medications called aromatase inhibitors (AI) that presumably avoids breast cancer in postmenopausal women who have an increased risk of developing the disease. A groundbreaking study undertaken by the Georgetown Lombardi Comprehensive Cancer Center suggests that exemestane reduces mammographic breast density of women employing this drug. Apparently dense breast tissue on mammogram is one of the strongest breast cancer predictors.

During the study, experts assessed the effect of exemestane (Aromasin) on breast density. Exemestane seems to decrease the amount of estrogen produced by the body. When estrogen level is reduced, it may slow or stop the growth of some breast tumors. The investigation enrolled 23 participants whose mammograms were taken before beginning exemestane and one year after treatment began. Investigators then compared breast density between the two mammograms for each woman.

The study was presented at the 33rd Annual CTRC-AACR San Antonio Breast Cancer Symposium in Texas.