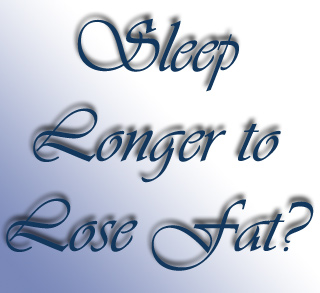 A unique way to lose weight has been apparently put forth in the following tidbit. Scientists from the University of Chicago claim that sleeping for long hours can aid to lose body fat. It has been suggested that darkness can stimulate melatonin production that helps feel sleepy.

The study was initiated on 10 overweight men and women for two separate two-week periods in a sleep lab. Throughout the investigations study volunteers were made to consume same calorie-restricted diet. While in one period participants were made to sleep for 8.5 hours each night, during the other they slept for only 5.5 hours. In both the periods it appeared that participants lost the same amount of weight, which was an average of around 7 pounds. Through the sleep-restricted period participants supposedly lost muscle mostly.

Ryan Soose, director of the Division of Sleep Surgery at the University of Pittsburgh Medical Center, affirmed, “Leptin is a hormone released by fat that provides information to the brain about energy metabolism. Reduced sleep is associated with lower leptin levels. That correlates with insulin resistance [a precursor to diabetes] and is related to other hormonal changes associated with weight gain.”

Scientists believe that when energy intake is reduced sleep plays a pivotal role in maintaining fat-free body mass. Due to sleep deficiency the effectiveness of typical dietary interventions for weight loss and related metabolic risk reduction can be seemingly affected. Sleep probably has an impact on the production of ghrelin, a hormone known to be produced for weight management. Ghrelin may stimulate the liver for generating more sugar, declining metabolism and reducing the body’s ability to burn fat. The hormone leptin too seems to be affected by sleep.

Kristina Sargent, added, “Sleep deprivation retards weight loss because if your body doesn’t get the rest it needs, it basically ‘believes’ that it is under constant threat. If you are under prolonged stress, the body refuses to give up stored fuel. Fat is designed as a storage tank for energy, and regular rest allows the body to slow down and release storage fats.”

Even little bit of chronic sleep deprivation apparently results as a stress to the body. Previously it had been pointed out that sleep deprivation effecting the production of ghrelin, leptin and other hormones possibly gives rise to obesity among children. It was ascertained that a hormonal level is linked with weight gain, obesity, diabetes and innumerable medical problems.

The study was published in the Annals of Internal Medicine.