In many parts of the world, epilepsy is still mistaken for a supernatural experience and patients go untreated throughout their shortened lifespan. Witch hunts still make the news in many countries including India. Phenomenons that do not fit our frame of reference or existing boundaries of knowledge often get categorized as such with disastrous consequences. But knowledge is power and ignorance is not always bliss. 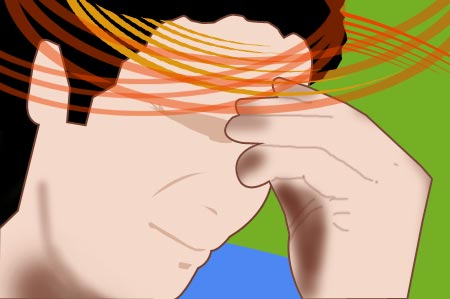 Even though much progress has been made over the past two centuries in the field of medicine, the cause and treatment of many diseases still remain elusive. While disorders of the body are generally regarded as disorders to be medically treated, perceptions about conditions of the more psychological variety still have a long way to go, even in big cities. I recently found myself using the short end of the knowledge stick and decided to wisen up. When a generally healthy old relative complained of hearing noises like whistles, I brushed it aside as anxiety. But the fact that I did this out of a pre-conceived notion rather than out of knowledge bothered me. The relative in question has been known to be a hypochondriac (excessive unfounded fretting over health issues, a kind of panic disorder). So I decided to investigate further.

It turns out this disorder is common and it also has a name. It is called Tinnitus. Noise can be heard only by the patient in one or both ears and it is usually in the form of a continuous or intermittent low frequency sound like beeps and clicks. In some cases, it may also be perceived as a song, tune or even verbal chatter. One can imagine how disconcerting this can be. If the patient is not anxious to begin with, the weird unexplained sounds and suspicious demeanor of friends and relatives will sure drive him/her to anxiety and depression.

Incidence of Tinnitus can be as high as 1 in 10 among people over 55 years of age. In most cases, it accompanies varying degrees of hearing loss; age-related or noise induced. If you actually suffer from this condition you would be in great company: Beethoven, Clapton, Bono, Letterman, Reagan, Lars Ulrich, Vincent Van Gogh and many others. Singers develop this condition due to prolonged and heavy exposure to loud music. Damage to the ear due to trauma, severe infections or side effects of medications can also lead to tinnitus.

In rare cases, the physician can also hear the sound as emanating from the patient’s ear! You might be tempted to say, ‘So the patient isn’t just imagining it.’ But consider the underlying causes. An actual sound perceived in the ear may be due muscle spasms or irregularities in blood flow. It has been seen that brain aneurysms can cause headaches and tinnitus in the form of a song stuck in your head! Yes, this is different from the irritating jingles you can’t get rid of. But it’s a strong reason not to ignore complaints such as tinnitus. In a majority of cases, however, the sound is perceived only by the patient.

Tinnitus does tend to occur in patients who have an anxiety disorder. The anxiety seems to make patients concentrate and stress more on the sound. It follows that medicine for anxiety and/or depression can alleviate the nagging sounds. Behavioral therapy can also help. But these treatments cannot completely reverse the condition. That being said, tinnitus can also occur in an individual with normal hearing and no accompanying physical or behavioral conditions making it very frustrating to diagnose and treat.

In case of aneurysms and muscle spasms, treatment or surgery can stop the sounds. However, there are no specific medications for tinnitus. This leaves us with prevention.

This would include all precautions necessary to avoid hearing loss as tinnitus is known to occur in conjuncture with loss of hearing. If you work in a noisy environment such as a manufacturing unit, we cannot stress the importance of ear muffs/ear plugs enough. This includes musicians and other professionals in the entertainment industry. But noise-induced hearing loss is not merely an occupational hazard in the iPod generation. The solution, though, remains simple, just turn the volume down. Smaller headphones that fit into the ear canal are far more damaging than the larger ones as sound travels directly to the ear drum

The elderly relative I mentioned at the beginning of this feature continues to complain about ‘whistling in the ear’. Sure enough, her physician has also put her on benzodiazepenes for anxiety. She also complains about periodic changes in hearing capacity which probably coincide with the tinnitus. With the medications and a hearing aid, she is getting used to living with the condition.

It is true that people with obsessive tendencies tend to concentrate more on the sounds and make life difficult for themselves but there is little a patient can do. These sounds are autonomous. A widely held theory is that as hearing capacity decreases, the auditory system tries to compensate by trying harder to perceive sounds. Overcompensation leads to tinnitus.

While this is not under our control, one can try to train the brain to tune out these sounds. White noise machines can be useful. These are devices you would have come across on teleshopping networks, sold as panaceas that work as you sleep. Non-jarring calming sounds such as ‘Gentle waves’ and ‘Peaceful Woods’ are advertised. You first reaction, off course, would be, ‘Who would buy that?’ But when the only other option is a whistle or unending clicks eating up your brain as you try to sleep, ‘Gentle waves’ would seem God-sent.

Our lifestyles change drastically. New gadgets, food and other fads take over our routines in a big way in short durations. It is established that electromagnetic fields emanating from various machines can lead to headaches, nausea and even tinnitus. A very prominent culprit amongst these is the mobile phone. While research is still being carried out to ascertain the various effects of continuous proximity to mobile devices, it would not hurt to keep such devices as far away as possible. Also consider switching them off when not in use and in general staying away if possible.

More importantly, do not brush aside seemingly innocuous complaints. Just because something sounds trivial does not mean it is. Only specialists are supposed to have encyclopedic knowledge and we should let specialists doctors decide. In this case, it would be a consultant physician followed by an ENT.