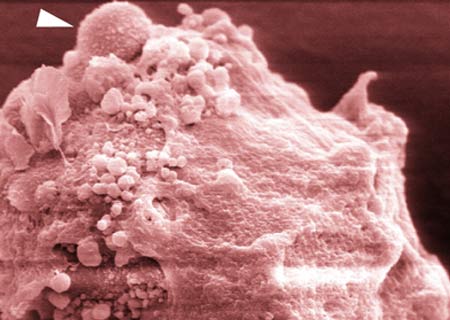 It has been observed that early stage cancer cells are secured by a platform that restrains malignancy of the tumor. However, experts from the University of Helsinki and the University of California have located a cleaver-wielding protein that frees certain tumor cells which spread the disease further.

The aforementioned protein apparently envelops the surface of breast tumor cells and helps the untethering of cells from the scaffold of the cell tissue. Thereafter, the released cells invade other tissues and spread the morbidity. This protein called hepsin is a protease that discards other proteins present in the protective basement membrane. It will possibly be a new drug target for therapies, affirms the team.

“If we could delay or prevent a tumor from switching from one that grows in place to one that invades, then that would be a major milestone in cancer treatment,” remarked study co-author Zena Werb, PhD, a professor of anatomy at UCSF.

In this research, the scientists examined the mammary glands of mice and tissue fragments known as organoids separated from the glands. Deactivation of a specific tumor suppressor called liver kinase B1 (Lkb1) apparently led to unnatural growth of milk developing structures and mammary glands.

The investigators found that a closely-knit construct of protein fibers covering the milk-secreting structure in the aforesaid mice, was ruptured. They zeroed in on hepsin as it appeared to be responsible for freeing the cells from the protective matrix.

Moreover, deactivation of hepsin supposedly led to restoration of the basement membrane critical for impeding disease progression. The researchers concluded that genetic elimination of hepsin from the mammary gland organoids could prohibit the development of cancer.

Therefore, drugs targeting hepsin could help avert cancer advancement as per experts. The research is published in the journal,Proceedings of the American Academy of Sciences (PNAS).