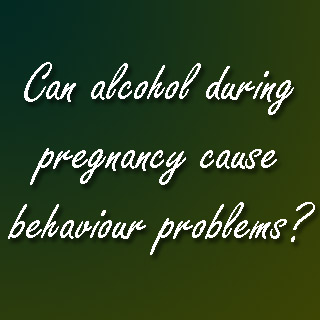 Pregnant women who consume alcohol need to pay attention to this piece of news. A latest study from Perth’s Telethon Institute for Child Health Research has found evidence that the quantity and timing of alcohol intake during pregnancy seems to affect child behaviour in different ways.

The study was noted to have been drawn from a random sample of more than 2000 mothers who completed a questionnaire three months after the baby’s delivery. Further, they appeared to have followed up when the child was 2, 5 and 8 years of age.

“Mothers who reported what we would classify as heavy drinking in the first trimester of pregnancy were nearly three times as likely to report that their child suffered with anxiety and/or depression or somatic complaints,” says lead author of the study, Colleen O’Leary.

The authors found that those who drank reasonably during that first trimester seemed to be twice as likely to report those types of behavioral issues for their child. Additionally, exposure to moderate or heavy levels of alcohol in late pregnancy could possibly raise the risk of aggressive types of behaviors in the child.

The findings suggest that both the timing and the amount of alcohol exposure in the womb apparently affect the type of behavioral problems expressed. Moreover, the findings revealed that low levels of alcohol appear to have not increased the risk of harm to the baby. However, evidence shows that the danger to the baby may increase with rising amounts consumed.

Ms O’Leary further said that, “It should also be noted that in this study moderate exposure is classified as drinking 3-4 standard drinks per occasion- that’s about two normal glasses of wine-and no more than a bottle of wine drunk over a week.”

Heavy drinking included women who were known to drink the equivalent of more than a bottle of wine every week. It is important that women who had consumed alcohol while pregnant may have not panicked by the findings.

“Not every smoker gets lung cancer despite them being at higher risk – and in this case, not every child will be affected by prenatal exposure to alcohol. However it is important that women have this information about increased risk so that they can make informed decisions to give their child the best start to life,” explains Ms O’Leary.

The National Health and Medical Research Council was noted to have recommended that the safest choice for women who are pregnant or planning a pregnancy is to refrain from alcohol. Ms O’Leary claimed that health professionals could perhaps assist by talking to women of child bearing age about their alcohol consumption. Also, they may encourage expectant mothers and women planning a pregnancy to abstain from alcohol.

The findings of the study ‘Evidence of a complex association between dose, pattern and timing of prenatal alcohol exposure and child behaviour problems’ have been published online in the journal, Addiction.