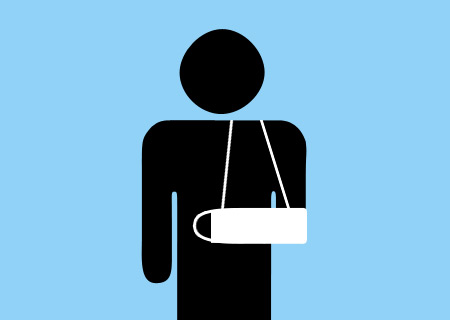 Most of us with a fractured hand have to sport a sling or cast presumably to support the injured hand. However, the sling could actually manifest changes in brain constituents allowing early adaptation and treatment of injuries, claim scientists from the University of Zurich.

For the study, about 10 right-handed individuals with an injured right arm who had to wear a sling for a minimum of 14 days, were incorporated. The complete right hand was not subject to any kind of movement, while the participants used their left hands to undertake daily activities such as eating, writing and so on. None of the volunteers suffered from mental issues, nerve or brain injuries.

Further, the subjects were exposed to 2 MRI scans, one within the first 2 days of injury and the second between the 16 days of using a sling or cast. Patients’ gray and white matter in the brain along with their motor skills, wrist-finger swiftness and hand movements were trialed.

As per the outcomes, the amount of white and gray matter apparently increased at the right side of the brain, while the left side of the brain shrunk in size. Moreover, enhanced motor skills were observed in the normal left hand which could be attributed to the expansion of the brain’s right portion. These kinds of changes in the brain construct are supposedly responsible for the transit of skills from the right to the left hand.

More analyses are required to gauge if stroke patients could benefit from a restraint provided for better arm movements. The study is published in Neurology, the journal of the American Academy of Neurology.