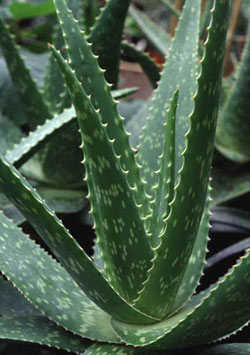 The aloe plant is a part of the lily family, but it is Aloe barbadensis which is more commonly known as Aloe Vera, which is of great significance. The health benefits of aloe Vera have been propagated throughout the world and there are very few places where it has not made its mark. Aloe Vera is available in the gel, spray, lotion, liquid, cream and in the form of a capsule.

In India, physicians have been recommending creams made from Aloe Vera, especially for skin eruptions and allergies. Gels and lotions have become very popular in Ayurvedic pharmacies Indian cosmetologists are turning to aloe Vera more than ever before.

The gel of aloe Vera has as many as 75 nutrients, and hence has turned out to be a very popular remedy for burns and wound. One important point to note is that it must be immediately applied in order to get relief from pain. The gel of aloe Vera is potent and it is got from the leaves. In fact, minor cuts, bruises and scrapes heal quickly on application of the gel. Even shingles, which can be very painful at times, responds to Aloe Vera.

Apart from providing relief from itching, it helps to heal the blisters and sores. For people suffering from Psoriasis, aloe Vera has provided relief by reducing the pain and itching. It has been proved that the gel causes considerable improvement in the nature of the lesions.

Although the benefits of aloe Vera are very useful for skin disorders, the juice is used in cases of people suffering from heartburn, ulcers and other digestive disorders. People suffering from indigestion or the irritable bowel syndrome have claimed that the juice of aloe Vera does provide comfort. It is sometimes used as a laxative. This juice acts as an anti inflammatory agent and in some cases is known to reduce the amount of stomach juices that are secreted. Several Japanese studies and clinical trials that have been conducted have shown that aloe Vera does have an impact on digestive system disorders.

The benefits of aloe Vera extend even to stimulating production of collagen and elastin both of which are necessary to prevent aging of the skin. As a moisturizer, aloe Vera is very popular as it removes dead cells and also aids in the penetration of healthy substances. It reduces the intensity of pigmentation and lightens dark spots on the face. The cosmetic industry is exploring its potential and the world may soon see a mini revolution.

Muscle pain and pain in the joints occurring because of arthritis can be alleviated by the application of aloe Vera gels or sprays. In fact if it is used regularly, it can actually help regress arthritis. The gel of aloe Vera is said to have a beneficial effect in the decrease of total cholesterol, triglycerides and blood fat lipid levels. As these are major factors, which cause coronary heart disease, it is worth exploring its full potential. The extract of aloe Vera is known to steady even blood sugar levels.

The full power of aloe Vera and the health benefits of aloe Vera have yet to be tapped. It contains almost 20 amino acids, vital minerals like calcium, magnesium and sodium in sufficient quantities, enzymes, vitamins, polysaccharides, nitrogen and other components which make it a miracle substance.