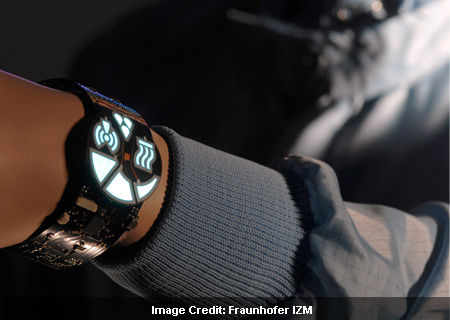 Technology in health and medicine sure seems to be leaping bounds ahead with scientists coming up with innovative devices to aid people. A minute blood lab that fits into the pocket of a jacket may swiftly examine the danger of blood clots in legs before a long distance flight, a sensor wristband for gauging electric smog could caution pacemaker patients of critical exposure. Seemingly, ‘smart plastics’ can develop such tools into reality. The researchers at the Fraunhofer Institute for Reliability and Microintegration IZM in Munich are said to be working on these themes.

Supposedly, every year around 80,000 people in Germany become gravely ill from occlusions of veins due to blood clots. Such thromboses could lead to pulmonary embolism or even heart attacks. Even airline passengers at long distance flights may be impacted by deep vein thrombosis. But with the new system, a quick and simple examination of a threat of travel-related thrombosis could soon be feasible.

Airline passengers would have to provide one drop of blood to the measuring device. The extraordinary attribute of this miniscale lab-on-a-chip is that the system is designed in plastic for an economical production, sheets or reel-to-reel. This could enable cost-effective production of disposable diagnostic systems.

Prof. Karlheinz Bock, head of the Polytronic Systems division at IZM, commented, “This example shows clearly the possibilities for polytronics. In a networked world, oriented towards people, inexpensive, multifunctional systems are needed – for example in Assisted Living. In order to build up the infrastructure necessary for this, electronic systems have to be produced in large quantities, in a cost-effective manner on large substrates. And with polymer electronics, this would be perfectly possible.”

Religiously working on the engineering of the investigative systems for deep vein thrombosis are ten major European research institutes and high tech firms. The central part of the upcoming analytical device, a lab-on-chip, was seemingly constructed and examined at IZM. It is said to be a tiny high-precision manufactured single-use cartridge that appears to perform as an instrument for the biochemical examination of a drop of blood.

This system could be rather vital for not only thrombosis-prone passengers on long-distance flights or stroke patients, but also for smokers, pregnant women or the obese. Similar to glucose tests, a drop of the patient’s blood is adequate on the single-use cartridge the physician positions then in a small hand-held scanner. Within just a few minutes, the outcomes apparently emerge on the display.

The sensor wristband, also engineered at IZM, is said to be suited for the continuing checking of a range of significant body functions of not only older patients but also of athletes. It is similar to a plastic wristwatch. Instead of a clock dial, the sensor wristband comes with an illuminated ‘electroluminescent display’ that could point out the definite body temperature at whatever of the day. It may also identify skin moisture, which could be an indication for dehydration of the patient or athlete. For a person with a pacemaker, the patient wristband may also indicate possible danger, signifying the power of electric or electromagnetic fields in close proximity.

The tiny sensors and the optical functions are believed to be used on the foils via a grouping of technical printing and lithographic processes. The sensor wristband can be produced cost-effectively both as individual sheets and by roll-to-roll production in bigger batches.