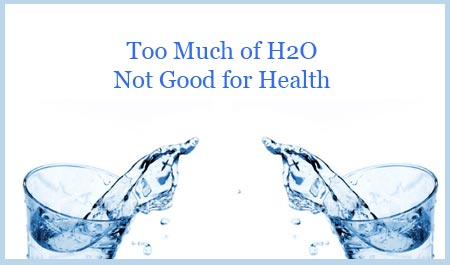 We have heard it umpteen amount of times that eight glasses of water is good for health. We have also heard that water keeps your body from being de-hydrated and keeps the kidneys working in perfect condition. But there is also a saying ‘Too much of anything is not good for you’. Yes! This may sound absurd but a new study has found that too much of water can cause harm to one’s health.

The study also explains the benefits of drinking water to keep the body well hydrated, but also suggests that too much of over-hydration may be risky to the human health and even lethal too. It is known that dehydration can cause heat exhaustion and heat stroke while exercising during warm weathers. Experts encouraged drinking fluids during exercise when the dehydration risks became evident.

The experts formulated guidelines to meet the needs of elite male athletes whose high-intensity exercise produced lots of fluid loss in sweat. It was also found that athletes began to increase the fluid intake, some of them even exceeded the limits and this resulted into water intoxication and hyponatremia (low blood sodium levels). So much so that, there were hundreds of cases and even deaths have been recorded in medical journals.

The study suggests that drinking water only when thirsty is ideal and accumulating water just for the sake of hydrating the body can cause harm. A Heavy or bloated feeling teamed with nausea or vomiting are signs of dozing up too much of H20 which leads to further harm.

The study is published in the July 2008 issue of Harvard Men’s Health Watch.