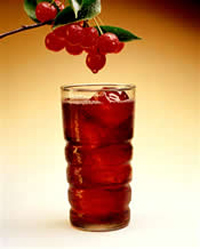 Researchers from the University of Vermont, USA identified a number of antioxidant and anti-inflammatory compounds in tart cherries but studies evaluating the fruit’s effectiveness in alleviating symptoms of inflammatory conditions have yielded mixed results. One study, however, showed that men and women who eat 45 cherries a day have lower levels of inflammatory markers in their blood.

The researching team investigated whether cherry juice taken before and after exercise can reduce the symptoms of exercise-induced muscle damage. The study involved 14 male college students, who drank 12 ounces of a blend of fresh cherry juice and apple juice or a placebo black cherry drink twice a day for eight days. On the fourth day, the men participated in several rounds of elbow exercises. Two weeks later, the men drank the alternate drink over the same period of time before participating in exercise. Following both rounds of exercise, the men underwent various measurements of muscle strength and pain.

The researchers suggest that men and women, particularly those with chronic, nagging pain, should try supplementing their diet with cherry juice.

Cherry juice contains many of the anti-inflammatory and antioxidant properties that many commercial drugs also contain, but from a natural source

Nitric oxide, Src kinases in lung cancer may be vital to...