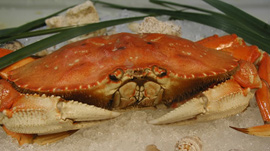 A chemical compound found in crabs and shrimp that has long been known to have certain medicinal value also can act like a “bed of nails,” keeping away microbes seeking to colonize wound dressings, catheters and other implantable medical devices, according to Montana State University researchers. Using the compound to coat these medical devices, they say, could help prevent thousands of bacterial and yeast infections annually.

The preliminary finding, by Philip Stewart, Ph.D., director of MSU’s Center for Biofilm Engineering, and Ross Carlson, Ph.D., assistant professor of chemical engineering, was described today at the 232nd national meeting of the American Chemical Society.

In their laboratory studies, chitosan – a sugar in the cells of crabs and shrimp – repelled bacteria and yeast, effectively preventing these microbes from forming slimy, glue-like layers of infectious cells, known as biofilms, Stewart said. These biofilms account for up to 65 percent of the bacterial infections in the United States, according to the Centers for Disease Control and Prevention.

The researchers say that while chitosan is well known for its antimicrobial activity, this is the first time its anti-biofilm activity has been described.

“Coating chitosan onto a surface seems to stop bacteria and yeast from colonizing that surface,” Stewart said. “Chitosan almost acts like a bed of nails. If a microbe alights on it, the chitosan skewers it or causes it to leak. That might not kill microbes outright, but it certainly discourages them from establishing a foothold.”

Biofilms are considered the leading cause of up to 400,000 cases of catheter-related, bloodstream infections each year, Stewart said. In addition, biofilms can arise on virtually any device implanted in the body, including mechanical heart valves, contact lens, artificial hips and knees, and breast implants. Once a biofilm-induced infection takes hold, it can be difficult to treat and often requires the surgical removal of the affected device, he said.

If further testing in animals and humans proves successful, coating these devices with chitosan could become an important first line of defense, according to Stewart. “I don’t want to claim we’ve fully solved the problem here,” he said, “but … I think over the next 10 years we’re going to be seeing new technologies in the form of coatings that will prevent or at least reduce the incidence of infection.”

Chitosan is derived from chitin, the main component of crustacean shells. It is sold commercially as a nutritional supplement and is an FDA-approved material for staunching blood loss. Chitosan also is used in biomaterials, as a thickener in cosmetics and a flocculating agent in water treatment. As a biomaterial, chitosan has a track record for its non-toxicity, biocompatibility, ability to promote healing and its inherent antimicrobial properties.