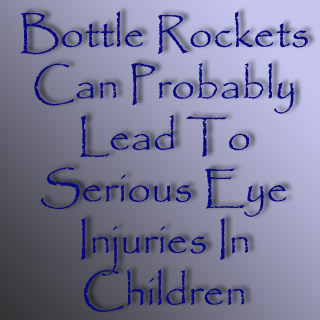 From a total of 9,200 emergency department admissions due to firework-related injuries, 1,400 cases apparently involve the eye. Bottle rockets about half the size of a normal firework may contain three main parts, an explosive-filled core, a nose cone that guides the fireworks’ flight and a guide stick, for stabilizing the rocket. A recent study claims that bottle rockets cause severe eye injuries in children, further leading to permanent loss of vision.

During the study, 11 eyes in eight boys and two girls aged 18 years or younger with eye injuries by bottle rockets between 2006 and 2009 were evaluated. Eight study subjects were injured within a month. While eight were launching bottle rockets at the time of injury, two were bystanders. None of the volunteers were using protective eyewear at the time. Seven eyes had defects in the epithelium lining the cornea, six injuries were caused because of bleeding in the front of the eye and retinal dialysis or a type of retinal tear took place within one eye. Even one eye had bleeding into the eye’s vitreous fluid.

A total of eight eyes possibly required initial treatments like surgical removal of the lens or corneal debridement, wherein the damaged corneal tissue has to be excluded. Mehnaz Kahn, M.S., and colleagues at Vanderbilt University Medical Center, Nashville, subjected three patients to additional procedures, such as muscle surgery and placement of a new lens. From the 10 eyes with follow-up, the most recent visual acuity apparently was 20/30 or better in four eyes and 20/200 or worse in six eyes. Traumatic maculopathy, or damage to the part of the retina responsible for central vision may result in permanent visual impairment.

The study appears online and will be published in the May print issue of Archives of Ophthalmology, one of the JAMA/Archives journals.