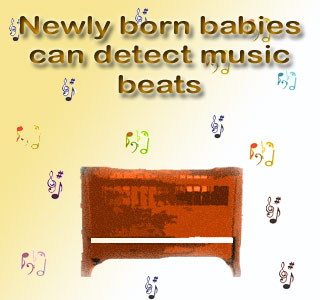 According to a latest research two to three day old infants can detect the beat and rhythm in music. Recognition of beat in music is termed as “beat induction.” This discovery was conducted by the researchers at the Institute for Psychology of the Hungarian Academy of Sciences and the Institute for Logic, Language and Computation of the University of Amsterdam.

Beat induction is said to be restricted only to humans. This methodology includes actions like making music together, clapping and even dancing to the music rhythm. In fact apparently beat induction may be in part credited for the origin of music.

Earlier it was presumed that beat induction was learned by a child in the initial months of its life. However, the present research says otherwise. They suggest that beat perception could be innate or learned in the womb itself. Supposedly since the auditory system is some-what functional a few months before the child’s birth, this possibility could be considered. However, though this research tallies with the presumption regarding the whereabouts of the genetic origin of music in humans, it has still left some questions unanswered.

With the use of scalp electrodes, the researchers attempted to determine the babies’ electrical brain signals. Self-adhesive ear-couplers were put on the babies’. It was through this medium that the babies heard a simple, regular rock rhythm, which consisted of hi-hat, snare and brass drum. It is stated that various basic rhythm variants were specially composed by deleting the un-required strokes in the rhythm. When the mixed notes missed a beat, an activity was noticed in the babies’ brains. Their brain generated an electrical response. This reveals that the babies had expected the missing beat to play, which did not play.

The researchers hope that their findings may prove to be helpful for future studies on the topic.

Their findings are published in Proceedings of the National Academy of Sciences.