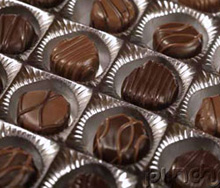 Eating chocolate may be healthy, but it seems that the only kind that will benefit your heart, is if it’s the dark kind, a new study has found. The study was conducted by a team of researchers led by Joe Vinson, a chemistry professor at the University of Scranton.

They found that though dark chocolate is so healthy that it can help reduce the risk of heart disease, white chocolate, on the other hand, provides very little health benefits.

Coffee, tea and chocolate all contain polyphenolic compounds that neutralize the damaging effects of oxygen on cells by playing a protective role against free radicals, which are molecules with unpaired electrons, and which have been linked to diseases from cancer to bad cholesterol.

The researchers noted that the darkest chocolates bind with LDL’s i.e. the bad cholesterol – and prevent oxidation, which is linked to heart disease.

In a series of blood cholesterol tests performed on Syrian golden hamsters before and after the rodents were fed “brownies” made with rodent chow, Hershey’s cocoa powder, water and coconut oil, the team found that elevated cholesterol levels decreased by 36 percent.

“What’s interesting in this new study is that the most benefit was seen in the group that consumed the dark chocolate,” said Catherine Neto, an associate professor of chemistry and biochemistry at the University of Massachusetts at Dartmouth.