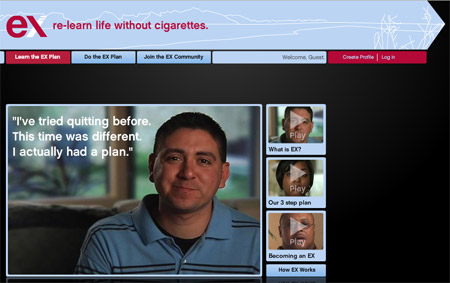 If you’ve been hell bent on quitting smoking, but have been unsuccessful all along, then this new website may be just the reason behind you finally bidding adieu to that nicotine filled little thing.

A new bilingual website has been initiated in Washington D.C. which has been created with the intention of helping smokers to quit the fatal addiction. Following the motto “Re-learn life without cigarettes”, the website named as BecomeAnEX.org, is a place where smokers can create free, personalized quit plans while following the reasons that may induce them to light up a ciggy, such as stress, alcohol, parties, or any other personal of professional pressure. And when things get uncontrollable, a live virtual support group will be there to help.

BecomeAnEX.org is part of a national public health campaign dubbed “EX”, which was introduced on Monday in Washington, D.C., by an alliance of well-known organizations to revive the fight against tobacco addiction. The foundation’s key aim is to reduce the smoking population, which at present is about 21 percent of American adults, over two thirds of which want to quit—to 12 percent by 2010. Over 12 states and several public health organizations have joined hands under the banner of the National Alliance for Tobacco Cessation. This conglomeration is led by the American Legacy Foundation.

A number of humorous-cum-sympathetic ad campaigns which take a look at the struggles people face adjusting their daily routines to life without cigarettes, will be launched towards the initiative in the forthcoming weeks.

The danger and fatal nature of smoking is not unknown to anyone, not even to a smoker. Yet ironically people indulge in it. An addiction, a distraction or perhaps just a way of life, well no explanation seems justifiable for a habit as terrible as smoking.