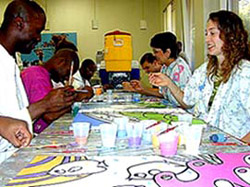 Music, dance, sculpture, painting, speech and movement can supplement medical treatment in different diseases. This system, called eurhythmy, is being discussed at an International Post-Graduate Meeting and training session going on at the ICRISAT in Hyderabad, India from January 14 to January 21.

Dr Clocker said the training programme was being organised by the Indian Branch of the Anthroposophical Society, begun with the aim of promoting the system based on the teachings of Austrian Scientist Rudolf Steiner. The system also aimed at integrating Indian Medical Branches like Homeopathy, Ayurveda and Yoga.

Anthrosophical Medicines had made significant changes in cancer therapy, children with special needs and education.

Dr Clocker said trainers from all over the world including doctors, physochologists, therapists, teachers and special educators had come together to share experiences and to train hundreds of Indian doctors gathered here.

Dr Peter Glosby of Mount Baker Waldorf Shool, said the system aimed at treating the body as well as the mind, soul and spirit.

Drugs were prepared from substances taken from minerals, plants and the animal kingdom.