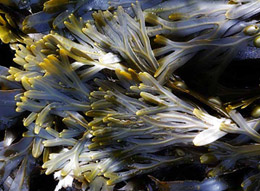 A U.S study has found that substances from marine seaweed may help protect against skin cancer that is caused due to too much exposure to the sun.

The study which was conducted on mice indicates that chemicals called brown algae polyphenols, which are found in a type of brown marine seaweed, might protect against skin cancers caused by ultraviolet B radiation, according to principal investigator Gary D. Stoner, professor emeritus of internal medicine and a cancer chemoprevention researcher at the Ohio State University Comprehensive Cancer Center.

Researchers applied the BAPs to the skin of hairless mice and fed it to the animals in their diet. In both cases, the substances reduced the number of skin tumors by up to 60 percent and their size by up to 43 percent. They also reduced inflammation.
These compounds seemed to be dramatically effective at fairly low doses, both orally and topically, says Stoner. The findings are published in the International Journal of Cancer.