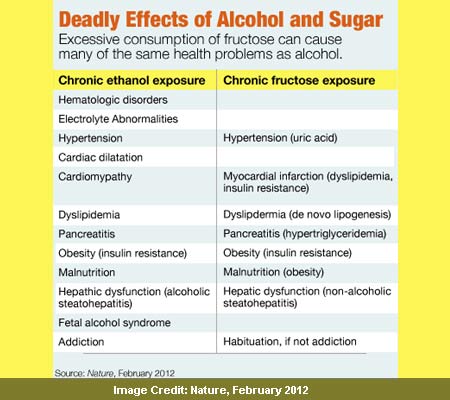 Many factors related to the lifestyle of people have been blamed for the growing obesity epidemic observed across the globe. Sugar is often understated for its role in diseases, but this study by scientists at the University of California (UCSF) has shed some light on its toxic nature.

Professionals believed that sugar contributed to approximately 35 million deaths globally by means of diseases like diabetes, cancer and heart complications. The team asserted that sugar could result in much more than merely increases in waistlines of people.

Given the levels of sugar people from the US consume, it may lead to blood pressure spikes, metabolism changes, alterations in critical hormones and substantial damage to the liver, claim the scientists. The effects observed in case of consuming sugar, which they believe is just a distilled form of alcohol, is consistent with those seen after consuming hard drinks.

“As long as the public thinks that sugar is just ‘empty calories,’ we have no chance in solving this,” commented Robert Lustig, a professor of pediatrics, in the division of endocrinology at the UCSF Benioff Children’s Hospital and director of the Weight Assessment for Teen and Child Health (WATCH) Program at UCSF.

Though sugar is considered to be a principal cause of the obesity epidemic, about 40% of individuals suffering from metabolic syndromes such as heart disease, diabetes or cancer may not fit into the clinically obese category.

The investigators have cited sugar to be toxic in many ways and therefore urge professionals to enlighten everyone on the emerging science of sugar. Similar to avenues opted for the restriction of alcohol or tobacco intake, interventions to keep sugar consumption in check ought to be implemented, the team concluded.