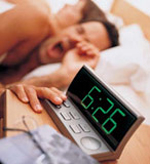 According to a new study, inadequate sleep could just lead to stoppage of brain cell production. Sleeping for less number of hours may cause the brain to stop producing new cells that help in the formation of memories.

Researchers at the Princeton University in New Jersey conducted some experiments on rats from which he concluded that lack of sleep affected the hippocampus, which is the region of the brain that is involved in the memory capability. The researchers found out that the effect is caused by a stress hormone.

The researchers put a particular number of rats through a phase of no sleep for 72 hours and compared their brain functions with those, which had sound sleep and found that those who missed out on rest and sleep had higher levels of the stress hormone corticosterone than those rats, which had good sleep.

They also noticed that lack of sleep led to a particular area of hippocampus producing fewer number of new brain cells. By maintaining the corticosterone levels, they were also able avoid the stoppage of new cell production.

As the scientists restored the sleep patterns in the rats within a week, they also found that the levels of nerve cell production, or neurogenesis, could not be restored for two weeks and the brain had to make additional efforts to overcome the shortage.

The details of the research are reported in the Proceedings of the National Academy of Science.

The scientists, led by Dr Elizabeth Gould, said the suppression of adult neurogenesis may underlie some of the cognitive deficits associated with prolonged sleep deprivation.