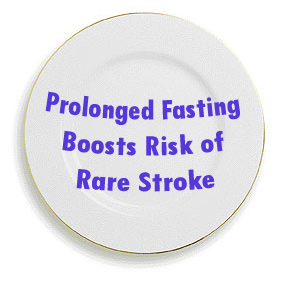 Over one billion Muslims across the globe fast during Ramadan. However, long durations of fasting may raise the risk of a rare type of stroke by almost three times, establishes a newly conducted study.

The research studied five years of data gathered from three hospitals in the Islamic nation of Iran, where fasting is a religious ritual during the month of Ramadan. While through the year, the average number of people admitted for cerebral venous sinus thrombosis (CVST) is 2.0, during the Ramadan month it was as much as 5.5 percent. Out of the 162 people studied, 33 had strokes while fasting; while 129 had strokes during the other months of the year.

Though CVST is more common in women, the latest study results showed that the average age and percentage of men versus women was the same in the two groups of patients.

Study author Dr. Mohammad Saadatnia, of Isfahan University of Medical Sciences said, “These results need to be confirmed by other studies, but they should be looked at carefully.” Adding, “Coexistence of usual risk factors, such as oral contraceptive and coagulopathic disorders, along with dehydration in patients while prolonged fasting can be the reason for increased susceptibility to CVST. People and their physicians need to be aware of possible complications of prolonged fasting.”

Studies carried out in the past have shown that fasting during the Ramadan period does not affect the rate of arterial stroke.

The findings were presented on Tuesday at the American Academy of Neurology annual meeting, in Chicago.