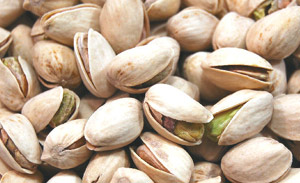 According to a team of researchers, a handful of pistachios may lower cholesterol and provide the antioxidants that are usually found in leafy green vegetables and brightly colored fruit.

The researchers conducted a randomized, controlled feeding experiment to test the effects of pistachios added to a heart healthy moderate-fat diet on cardiovascular disease risk factors.

Participants began the study by eating an Average American Diet consisting of 35 percent total fat and 11 percent saturated fat for two weeks. They then tested three diets for four weeks each with a two-week break between each diet.

“We had really good compliance and participants were generally pleased with the diets,” says Gebauer.

Standard blood tests determined the various cholesterol levels in the participant’s blood after each diet. Researchers found that 3 ounces of pistachios reduced the amounts of total cholesterol in the blood by 8.4 percent and low-density lipoprotein (LDL), the so-called bad cholesterol, by 11.6 percent. The study also found that non-high density lipoproteins (non-HDL) decreased by 11.2 percent. Non-HDL levels are considered reliable predictors of cardiovascular disease risk.

The three-ounce pistachio diet also decreased the ratios of total cholesterol to HDL, LDL to HDL and non-HDL to HDL and apolipoprotein B, which are all measures of cardiovascular disease risk. “We were pleased to see a difference between the two doses of pistachios for the lipoprotein ratios because it would appear that pistachios are causing the effect and that they act in a dose dependent way,” says Gebauer.

In addition, during this study researchers, researchers looked at the effects of these diets on oxidized LDL and on antioxidants in the blood.

“We were trying to see if the increased levels of antioxidants provided by pistachios could reduce inflammation and oxidation,” says Gebauer. Pistachios contain more lutein, – normally found in dark leafy vegetables — beta carotene – a precursor to vitamin A – and gamma tocopherol – the major form of vitamin E – than other nuts. It is oxidized LDL and other lipproteins that contribute to plaque formation in arteries.

The researchers reported that both the 1.5 and 3 ounce pistachio diets reduced oxidized LDL compared with the baseline diet. Pistachio-enriched diets also resulted in significantly higher levels of lutein in the blood. The increased lutein from the 3-ounce pistachio diet correlated with a reduction in oxidized LDL which may indicate that the lutein in pistachio nuts improves the risk of cardiovascular disease by reducing serum oxidized LDL.

Hand shakes are better than Kissing to avoid contracting of illnesses