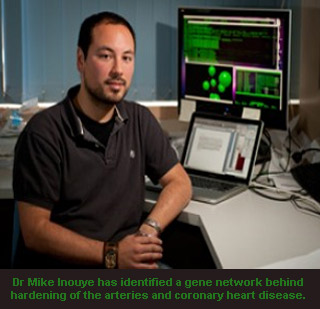 Coronary artery disease is regarded as the most common form of heart disease. In order to anticipate an individual’s risk to developing this ailment, concentrations of cholesterols circulating in the blood may be measured. A team of scientists from Australia, Europe and the United Kingdom has discovered a gene network that is probably responsible for hardening of the arteries and coronary heart disease.

Experts claim that the main pathology of coronary artery disease is ‘hardening of the arteries,’ or atherosclerosis. It was elucidated that atherosclerosis is a cycle in which cholesterol accumulates on the walls of arteries and the body’s resultant immune response leads to more build up. Samples from more than 500 volunteers were scrutinized by the investigators, to ascertain the way cholesterols in the blood stream activate circulating immune cells. These samples probably enabled the experts to construct biological networks of genes that move in agreement.

“For all intents and purposes these genes look like an inflammatory network and appear reactive to high-density lipoprotein, triglycerides and apolipoprotein B; all of which are predictors of downstream cardiovascular disease. We are just beginning to understand biological networks and how they relate to disease. This is absolutely imperative as, while knowing the changes in DNA that predict disease is important, we can now do better. Knowing how diseases impact biological networks allows researchers to identify multiple levels of potential intervention,” added Dr Michael Inouye, a postdoctoral fellow at the Walter and Eliza Hall Institute.

All the volunteers were enrolled in Finland’s Dietary, Lifestyle and Genetic determinants of Obesity and Metabolic syndrome (DILGOM) study. On completion of the investigations, the team found a network of genes whose activity was supposedly tied to the level of cholesterols in the blood. This finding can possibly aid in determining novel targets for the treatment of heart disease.

The research is published in the latest issue of the journal PLoS Genetics.