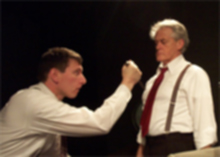 It really does not pay off for men to be hostile, for it could put them at a greater risk for heart disease and diabetes. The findings are based on a new study conducted by a team of researchers led by Steven Boyle, PH.D of Duke University Medical Center.

As part of this study, the researchers studied 313 male Vietnam veterans who were part of a larger 20-year study on the effects of Agent Orange, a herbicide and defoliant used by the US military in its Herbicidal Warfare program during the Vietnam War.

The study found that men who are hostile and prone to frequent intense feelings of anger and depression could actually be harming their immune systems and putting themselves at risk for coronary heart disease as well as related disorders like type 2 diabetes and high blood pressure.

The researchers put the veterans through a standard psychological test used to assess hostility, depression and anger, with series of blood levels being taken on three occasions between 1992 and 2002.

Researchers measured two immune system proteins known as C3 and C4. Both are markers of inflammation, which is the body’s response to injury or infection. Changes in C3 and C4 are associated with a number of diseases, including some that negatively can affect the arteries around the heart, such as diabetes.

Men whose psychological screening showed the highest level of hostility, depressive symptoms and anger had a 7.1 percent increase in their C3 levels, while men with low levels of these attributes showed no change over the 10-year study period.

The researchers factored in other risk factors for higher C3 levels such as smoking, age, race, alcohol use and body mass index (a measure of obesity). They also could find no known influence of Agent Orange exposure on the increased C3 levels.

‘We showed positives associations between psychological attributes and 10-year changes in C3 among initially healthy middle-aged males,’ the researchers write.

‘Hostile, depressed and angry people see the world around them in a different way, and sometimes they see it as them against the world. That kind of lifestyle often leads to greater stress and possibly changes in the way the body functions that could lead to disease,’ said study co-author Edward Suarez, Ph.D.