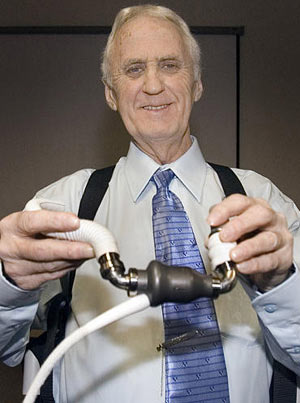 A heart patient in Montreal has become the first living Canadian without a heartbeat. In November, Gerard Langevin, a 65 year old man from Quebec man became the first patient to undergo successful implantation of a mechanical heart that pumps blood continuously using a turbine suspended in a magnetic field.

The medical breakthrough was announced by Dr. Renzo Cecere and Dr. Nadia Giannetti at a news conference at McGill University Health Centre this week.

The device has a turbine that pumps blood from the left ventricle to the aorta. From there the blood is distributed to the rest of the body by the continuous flow pump which is powered by batteries located in pouches on Langevin’s body.

Though the device is still in the trial stages and the research is only being done on “end stage” heart patients, the doctors said they believe the technology will change the way heart patients are treated, providing an alternative to heart transplant surgery.
The Heartmate Ii is predicted to last for up to 10 years, and will surely outlast other similar devices.

Prior to the surgery the patient was very sick, had lost more than 20 pounds, and had very low blood pressure, said Giannetti. He has made significant improvement since receiving the device, however.

“He sailed through the surgery, and you have to understand he was very sick going into the surgery and this is very difficult surgery,” Giannetti told reporters.

“He sailed through it and he’s recovering very nicely and I expect he’s going to go on a very long time with this pump.”
Langevin admitted that prior to the operation he felt his time was up after he suffered his second heart attack this summer. He had his first in 2002. “I was finished… I had no time left… I probably had only a few months left to live,” Langevin said.

The cost of the transplant was $100,000. The device has yet to be approved for use in either Canada or the U.S.