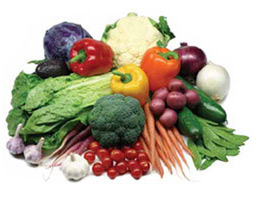 Compounds that give colour to fruits and vegetables might fight against colon cancer, a new study has found. The study was conducted by a team of researchers led by Monica Giusti at Ohio State University.

As part of the study researchers retrieved anthocyanins, compounds that give colour to most red, purple and blue fruits, from some relatively exotic fruits and plants including grapes, radishes, purple corn, chokeberries, bilberries, purple carrots and elderberries and tested them on rats and on human colon cancer cells.

Researchers noted that in some cases, slight alterations to the structure of anthocyanin molecules made these compounds more potent anti-cancer agents.

The study found that anthocyanins appreciably slowed the growth of colon cancer cells and the amount of anthocyanin extract needed to reduce cancer cell growth by 50 percent varied among the plants. Extract derived from purple corn was the most potent, in that it took the least amount of this extract (14 micrograms per milliliter of cell growth solution) to cut cell numbers in half.

“All fruits and vegetables that are rich in anthocyanins have compounds that can slow down the growth of colon cancer cells, whether in experiments in laboratory dishes or inside the body,” Giusti said.

In animal studies, rats induced with colon cancer cells were fed a daily diet of anthocyanin extracts either from bilberries and chokeberries, which are most often used as flavourings or to make jams and juices. The dietary addition of the anthocyanin extracts reduced signs of colon tumors by 70 and 60 percent, respectively, when compared to control rats.

The results suggested that anthocyanins might protect against certain gastrointestinal cancers.

“Very little anthocyanin is absorbed by the bloodstream. But a large proportion travels through the gastrointestinal tract, where those tissues absorb the compound,” Giusti said.