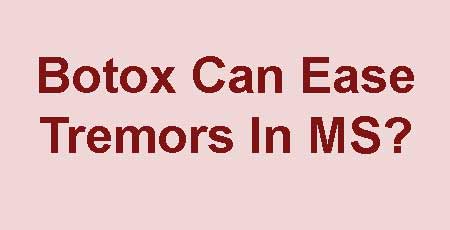 Botox sure seems to be breaking the realms of cosmetics and an AAN study has now shown how Botulinum toxin could help alleviate tremors in multiple sclerosis (MS) patients. Reported in the journal, Neurology, the findings put forth an alternative form of treatment for people experiencing shakiness in MS.

As part of the trial, about 23 persons suffering from MS were exposed to Botox type A injections or placebos for a span of 3 months. The groups were then interchanged after a stipulated time frame. The team measured their abilities to write, draw and walk prior to and after treatments. Video evaluations were also conducted for almost 6 months.

study author Anneke van der Walt, MD, consultant neurologist at The Royal Melbourne Hospital and research fellow with the University of Melbourne in Australia, shared, “Treatments in use for tremor in MS are not sufficiently effective and new alternatives are needed.”

At the end of 6 months, the scientists found that the participants apparently showed significant improvements in their tremors, as compared to the controls. In terms of intensity, their tremors digressed from moderate to mild by shifting 2 points on a 10-point scale. With respect to drawing and writing, patients attained a point higher in assessments, as compared to those on placebos.

One of the side effects reported by roughly 42% of the people was muscle weakness, but it was very subtle and got treated in less than 2 weeks. The study basically revealed that Botox injections could treat tremors in MS patients. The current treatment options for this condition are restricted.