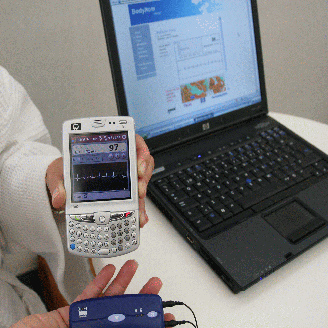 Cardiac patients will be reinforced with a wireless device that allows doctors to monitor their patients come the New Year. The system is called BodyKom and has been made available to doctors and hospitals in Sweden and Norway. It has been developed by Kiwok, a Swedish technology company.

The good news is that the BodyKom system for cardiac patients is expected to be available in India by January 2008.

According to Anders Bjorlin, the co-founder of the service, “We plan to expand our service to northern Europe and then to India, Canada and Korea by early 2008.”

So what does the BodyKom system do? This device connects wirelessly to sensors present on the patient. If dangerous changes happen to be detected in the patient’s body, the hospital or healthcare services are automatically alerted over a secure mobile network connection. The unit receiving the alarm will also be informed of the geographic position of the patient through the use of GPS technology.

Aditya Parkash, CEO of SRS Globalsoft, the joint venture partner of Kiwok in India said, “We see a market size in India of 2 million patients requiring our service per year. The subscription for the service will be around Rs.7,000 including the patient kit. Later, we hope to extend similar services to patients of diabetes and hyerptension.”

The BodyKom device will also facilitate diagnosis of heart problems in children who might not be able to describe their condition.

Bjorlin, himself on a pacemaker, said he once suffered a blackout while driving at 100km because of wrong cardiac medicine. This inspired him to develop BodyKom.

Head to teh Kiwok web site for further information.