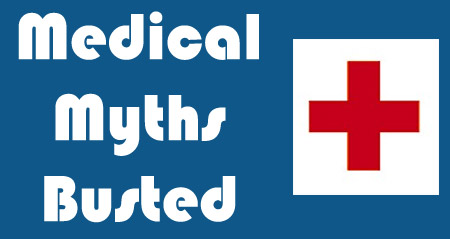 Researchers from the Indiana University School of Medicine have busted seven commonly held medical myths as being untrue.

The myths exposed by researchers include the recommendation that humans must consume at least eight glasses of water per day. The researchers found no basis for this belief and in fact suggested that drinking too much water could be dangerous.

The second most believed myth that humans only use 10 per cent of brains was also busted as most studies showed that in brain damaged people the other 90 percent never becomes active.

Similarly reading in dim light does cause problems for the eyes as in blinking and dryness, but researchers were not able to find long-term effects.

Another belief that hair and fingernails continue to grow after death was also found to be baseless. In fact hormonal regulation is a must if these are to grow and since there is none after death, skin and nails never grow after life ceases.

Despite many hospitals banning the use of mobiles, the researchers were unable to find any evidence that these devices interfered with medical equipment.

Also shaving does not cause hair to grow back faster and rougher because shaved hair does not have the fine taper seen in unshaved hair, the researchers pointed out.

Lastly, eating turkey was in no way associated with increased drowsiness as turkey, chicken and minced beef were found to contain similar amounts of the amino acid tyrptophan.

“Any large meal can induce sleepiness because blood flow and oxygenation to the brain decrease, and meals rich in protein or carbohydrate may cause drowsiness. Wine may also play a role,” Aaron Carroll and Rachel Vreeman, who were behind this study say.