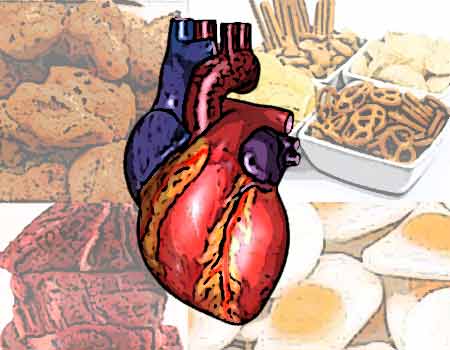 We all enjoy gorging on a Western diet more than anything else. The diet typically includes fried foods, red meat and dairy products along with loads of salty snacks. A new study claims that this kind of Western diet is responsible for around 30% of heart attacks in the world.

The novel study which included a review of dietary patterns in nearly 52 countries buttoned down on three significant dietary patterns in the world- Oriental, Prudent and Western. While the Oriental diet comprises of a higher intake of tofu, soy and other sauces, the Prudent diet includes large consumption of fruits and vegetables. As mentioned earlier a Western diet includes fried foods, salty snacks, eggs and meat in large quantities.

Romania Iqbal, Ph.D., lead author of the study, remarked, “A simple dietary score, which included both good and bad foods with the higher score indicating a worse diet, showed that 30 percent of the risk of heart disease in a population could be related to poor diet.”

“The objective of this study was to understand the modifiable risk factors of heart attacks at a global level”, added Salim Yusuf, D.Phil., the study’s senior author.

To fix upon the effects of the Western diet, researchers examined the INTERHEART study. The study involved a documentation of the link between various risk factors and heart attack of about 16,000 subjects in nearly 52 countries. The analysis included 5,761 heart attacks. Comparing them to 10,646 people in the control group mainly without any known heart diseases, the researchers found that individuals whose dietary intakes were high in meat, fat and dairy products are in fact putting themselves at a much higher risk of a heart attack.

Composing a dietary risk score questionnaire for heart attacks patients, based on 19 food groups and adjusted for dietary preferences of each country, the research included personal interviews of the heart attack patients and the control group by trained medical experts. Healthy food items like fruits and vegetables and unhealthy food items like as fried foods and salty snacks were a part of the questionnaire.

While Individuals in the Oriental pattern had no significant heart attack risk, those who took to the Prudent diet with more fruits and vegetables were 30% less likely of suffering from the heart attack as against those who ate little or no fruits and vegetables. Even after adjusting for known risk factors, researchers discovered those who consumed the Western diet had a 35% greater risk of having a heart attack compared to people who consumed little or no fried foods and meat.

Researchers suggest that in order to lower our risks of heart attacks we could do away with certain foods from the Western diet. Experts also reveal that the reason why the Oriental diet could have no association with heart attacks may be because certain components of the diet could be protective while others with higher sodium content of soy sauces could increase cardiovascular risk, neutralizing the overall effects.

This study has been published in the Circulation: Journal of the American Heart Association.