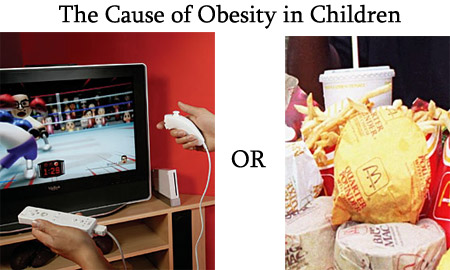 Nowadays, a lot of children are become obese are younger ages. This can be attributed to the lifestyle they follow, which could include eating too much of fast foods, watching TV and sometimes playing video games for hours on end.

Now, Steve Easterbrook, chief executive of McDonald’s UK has said that while “the issue of obesity is complex,” video games are at least partly to blame for Britain’s overweight children.

Easterbrook was quoted by TimesOnline as saying, “There’s fewer green spaces and kids sit home playing computer games on the TV, when in the past they’d have been burning off energy outside.”

He further went on to say that the government, the food and drink industry, and the individuals themselves make up the three pillars that need to work together to solve the obesity issue.

Easterbrook has tried to “broaden out the menu and provide more options for people,” for his own part. Further, he has also tried to lower the sodium, sugar, and trans fat levels in McDonald’s food.

Well, it seems McDonald’s is trying their level best to prove that theirs is a healthy offering. On the contrary, eating such burgers and French fries on a daily basis could actually cause one to become overweight and it’s quite unhealthy too.

On the other hand, video games when played in moderation, could give you that mental lift you really need. Also, the latest Wii consoles offer kids the chance to get off their couch and ‘play’. So, the point is that one should do all thing sin moderation.