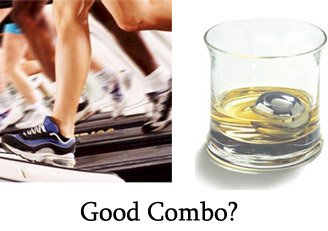 According to a new study, people who remain active and also drink alcohol in moderation can effectively reduce their risk of dying compared to those who completely abstain from consuming it.

Experts found that people who did not drink any alcohol nor do any exercise, had a 30% to 49% higher risk of heart disease than those who either drank, exercised or did both.

The findings are based on a study which followed 11,914 Danish men and women over a period of around 20 years. During the follow up of the study, 1242 people died from ischemic heart disease (IHD) and there were 5901 deaths from different causes.

It was found that people who drank at least a drink weekly and were physically active had a 44%-50% lower risk of IHD compared to physically inactive non-drinkers.

Ellen Mason, cardiac nurse at the British Heart Foundation, said regular exercise was still more beneficial than drinking and warned against excessive alcohol intake. She added:”The combination of moderate drinking and physical activity appears to be a winning one in reducing the risk of fatal heart disease.

“However, drinking too much starts to outweigh the benefits of alcohol intake and can increase your blood pressure. Physical activity has shown greater benefits to heart health and overall health in previous research, compared to alcohol.Alcohol is a depressant whereas exercise releases mood enhancing hormones which can benefit quality of life as well as reduce the risk of death.”

The lead author of the study, Jane Ostergaard Pedersen, a research assistant at the National Institute of Public Health, said moderate alcohol intake combined with regular exercise was vital.

She said: “The lowest risk of death from all causes was observed among physically active moderate drinkers and the highest risk among the physically inactive heavy and non-drinkers.”