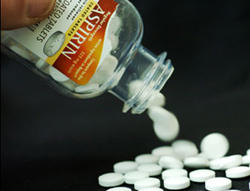 After studying the cancer history of post-menopausal women over years, researchers have reported that those who took aspirin in the beginning of their study were likely to have 16 per cent less chances of developing the disease.

Researchers at the Mayo Clinic College of Medicine in Rochester, Minnesota conducted their study with a sample of 22,000 post-menopausal women over 12 years.

They also found that these women are 13 per cent less likely to die from it during that time.

Lead researcher Aditya Bhadria said that the anti-inflammatory effect of aspirin might be responsible.

The only factor that affected the result was smoking, which tended to reduce the defensive effect by a bit.

But, a similar effect was not found with ibuprofen or any other anti-inflammatories.